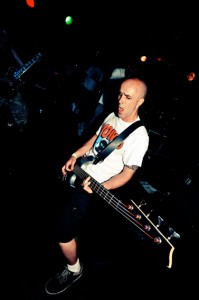 Rather than mope on about something tragic that irreversibly coloured my adult life, and there have been a few game-changers, I can tell you, but I’m past feeling sorry for myself, I’d rather talk about something positive, that’s shaped me for the better. Music is an obvious one, punk rock especially, although hardcore and thrash metal would be snapping at its heels, but I think I’ll go for something slightly less obvious. But only slightly, mind… and still very much music-related, of course – because everything in my life invariably is.

The thing that ruined my life – in the best possible way, of course – was when my cousin Antony Mowbray talked me into playing bass. We were about thirteen years old, and loving the punk rock, and it felt like we ought to do a band of our own – because let’s face it, there was nothing else to do where we grew up. Except vandalise phone boxes and public toilets, and we’d done them all by then. He had a guitar, and was a bit of a natural, and he could probably see I didn’t have the same aptitude for music as he did, so he pointed me in the direction of bass. His reasoning being, no doubt, that four strings are easier to master… well, “master” is stronging it a bit too much, so let’s just say “grapple with”. We begged and borrowed a bass off someone, and he proceeded to show me some UK Subs tunes… no prizes for guessing the first one we tackled. Any bassist will tell you it’s ‘Warhead’ that’s the go-to number for a numpty just figuring out his E-string from his G-string. ‘Tomorrow’s Girls’ came later, much later!

We would sit in his bedroom, and because we couldn’t afford amps, we would press the heads of our guitars against the cupboard door, and the vibrations of the wood acted as a natural amplifier. Well, sort of… if you coughed, you drowned out the notes, so there was no danger of getting tinnitus (again, that came later, much later!) And from there we put together our first band, Ammonia 77, and started playing very amateurish, very drunk gigs, but we kept at it. It was an invaluable conduit for our youthful aggression and frustration, and I honestly don’t know where I’d be without it. I can only imagine.

And whilst I was never going to be J.J. Burnell on the bass, I developed a style of my own, and wasn’t half bad on it in the end, and since that time, I’ve not been out of a band for more than a few months. In fact, most of the time, I’ve been in two. And on occasions, three! But that modest skill, greedily picked up out of boredom and a love for Discharge, has taken me around the world and made me literally thousands of friends – and a few enemies along the way as well, truth be told. I’ve helped write and played on over ten albums, and terrorised many a neighbour in the process, and it’s helped me find a genuine sense of fulfilment in my life. Every time you write a song, you create something with a life of its own, you leave another mark for others to know you by. It’s like having kids, I suppose, and – god help me, and all of you – I’ve had hundreds over the years, some better than others. But most importantly of all, I’ve had a load of fun doing it. And all because I picked it up and gave it a go, and kept coming back for more, even when my fingertips were bleeding and my ears were ringing from the damn thing being so out of tune, so never shy away from doing something because people tell you you’re not good enough. Not good enough for them perhaps, but plenty good enough for yourself, and that’s what matters.

Thirty Six Strategies incredible debut album, ‘Strategy Three’ is out now, and available from all good record stores and cool distro’s. Or, you can order it directly from the band by going HERE!

Well, what are you waiting for? Chop, chop, hurry up and order the damn record!