Warning: preg_match() expects parameter 2 to be string, object given in /var/www/vip4/sites/vip6102689/httpd/htdocs/wp-includes/formatting.php on line 4866
 Doctor Who: Requiem for the Rocket Men - Mass Movement
x
Spread the love 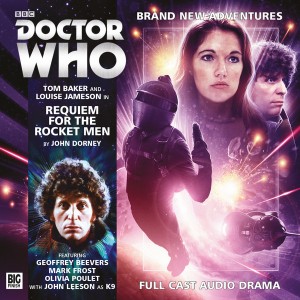 Doctor Who: Requiem for the Rocket Men – Starring Tom Baker, Louise Jameson, Geoffrey Beevers, John Leeson, Mark Frost, Olivia Poulet, Damian Lynch & Pat Ruins & Written by John Dorney – CD / Download (Big Finish)
What do you do if, while enjoying a visit to a shopping planet, you stumble across a ‘Wanted’ poster of yourself? And what if you were then apprehended at gunpoint by a bounty hunter determined to turn you in to those responsible for said poster? Those responsible being a particularly troublesome bunch of life-long enemies known universally as the Rocket Men? For most of us, it’d really spoil our afternoon, but for the Doctor and Leela, it’s just another day at the office and instead of cowering in fear, they determine to finally put paid to the menace of the space pirates once and for all, even if they are being aided by another of the Doctor’s most vicious nemeses, already identified, I’m sure, by most of you from the cast list. But, as you know, I don’t do spoilers, so I’m not going to name names.

‘Requiem for the Rocket Men’ is, almost from the very beginning, a wonderfully convoluted story that twists, turns and weaves its way through an intricately plotted drama in which nothing is what it first seems to be, even The Doctor and Leela. It’s an action filled tale of foiled enterprise and of taking the fight to the enemy in which secret bases and ships are laid to waste as battle lines are drawn and well laid plans are put into action, while good men rise to meet their fate and villains fall by the wayside, and it’s a story of loss, as our hero’s finally fall prey to the skulduggery and intrigue of The Doctor’s oldest foe.

John Dorney’s frenzied plot effortlessly zigs and zags its way through a pulp flavoured, b-movie inspired science fiction tale that, thanks to its non-linear progression, springs surprise after surprise on the listener, each one revealing a little more it’s enticing journey. While it’s a little disconcerting at first, you soon become used to the delightful way in which Dorney spins his tale, and the cast devour, and revel in, it, delivering each and every scene with gusto and aplomb. As for it being the Rocket Men’s requiem, well, as we all know, you can’t keep a good villain down, and just like the very worst of the Saturday morning cliff-hanger scoundrels and evildoers, I’m sure they’ll be back. Strap yourselves in and get ready. It’s one heck of a ride… Tim Mass Movement