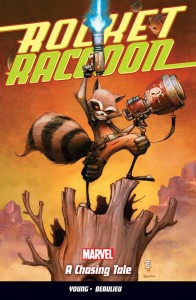 Rocket Raccoon: A Chasing Tale – Skottie Young & Jean-Francois Beaulieu (Marvel / Panini)
With the world seemingly going Groot crazy, it would be kind of easy to forget about the other members of the Guardians of the Galaxy, like the blonde guy and the big green dude…Wait, it’s even happening to me! Just kidding folks, much as I love Groot (and let’s face it, the mainstream has a point, after all, who wouldn’t love a giant, walking tree who can only say three words and who has the ability to regenerate from the smallest fragment of his wooden body), I’ve always had a soft spot for Rocket Raccoon, the psychotic, intelligent, one of a kind procyonid with a fondness for big guns, screaming ‘Blam! Murdered you’ and doing just that to anyone who crosses him. Even though I’m not usually a fan of anthropomorphic characters, for some reason I can relate to Rocket and his bordering-on-insane world view and ideas. He makes things, and in the process has a lot of, fun, and having all that fun finally catches up with him in ‘A Chasing Tale’.

Rocket being Rocket, he’s made a lot of enemies; and not being speciest, he’s loved a lot of ladies from here, there and everywhere during his deep space adventures. Not being the type to settle down or shake and make up however, means that he’s left a lot of angry and upset beings in his wake. And in ‘A Chasing Tale’, he finds himself framed and pursued across the Galaxy by a legion of his former admirers and an equally screwy, and just a bit nuts, old enemy. It’s fast, laugh out funny and thrives on its own peculiar, and strangely addictive, brand of mayhem, a patented source of good humoured lunacy that Skottie Young builds his story around, and on, while Beaulieu’s fantastic, almost retro, highly detailed and energetic art adds an extra layer of demented and deranged entertainment to the proceedings. Oh, and did I mention that ‘’A Chasing take’ also features a spaghetti western flavoured, revenge fuelled tale of surplus war robots, and Groot, in his own inimitable style, recounting a particularly, bizarre treasure hunt that wasn’t really as treasure hunt? I didn’t? Well I have now! Move over Groot, its Rocket time… Tim Mass Movement