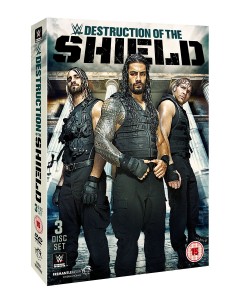 Destruction of The Shield (WWE DVD)
This excellent three-disc set is called “Destruction of The Shield”, but it could just as well be given the title: “The Preordination of Roman Reigns”.  As all wrestling fans know, the main event for Wrestlemania 31 at the end of March is the 2015 Royal Rumble winner, Roman Reigns, going face to face with the reigning, defending, undisputed WWE Heavyweight Champion of the World, Brock Lesnar.  This match has met some criticism from a very vocal section of the WWE Universe who feel that Reigns is undeserving of the spot.  Like the criticism levied at John Cena before him (and Reigns’ cousin, The Rock, when he joined WWE in 1996 as a “third generation superstar”), the feeling is that Roman Reigns is being forced down our throats as a hero when there are plenty of other heroes out there who we have chosen for ourselves, currently being overlooked.

The aim of this collection is shine a light on the three wrestlers who exploded onto the WWE scene at Survivor Series 2012 – Dean Ambrose, Seth Rollins and Roman Reigns.  It is based around a simple conceit: at SummerSlam 2014, Ambrose and Rollins were about to tear the house down in the best Lumberjack match of all time and Reigns was about to have his first major singles match on PPV against Randy Orton.  The documentary portion of the collection asks how these three men got here, from their early days in the indies, to the WWE developmental  system in Florida Championship Wrestling and then NXT, to their debut and subsequent dominance of the WWE main event, before finally disbanding in the summer of 2014, when Seth Rollins pressed the self-destruct button and betrayed his fellow “brothers” to join Triple H and The Authority.  We end with the impending matches at SummerSlam and the full extent of their importance if the former Shield brethren are going to continue their ascendency as solo superstars.

And even as I write this, we see one of the problems with this collection.  Though minor, it certainly jars throughout: in this day and age of the wrestling business being fully exposed it is a shame that WWE chose to maintain the illusion of kayfabe throughout the documentary.  Moments when Rollins or Ambrose talk about how much they hate the other, and are training hard to defeat them, or when Reigns looks wistful at the fact that sometimes brothers like he and Rollins unfortunately have to get in the ring to settle their differences, you are treated like an idiot.  It’s 2015.  We all know how this thing works, and the odd moments when the talking heads – either the Shield themselves or those talking about them – attempt to maintain the illusion of the characters and storylines of WWE TV devalue the more interesting insights into the real behind-the-scenes story of Ambrose, Rollins and Reigns.  Truth is always more rewarding that fiction, and the real story of Ambrose and Rollins as two highly touted indie performers (we get some nice clips of Rollins back in Ring of Honor), working their way into WWE and grabbing the brass ring by putting on the best matches of each show, to then storm the main roster with a unique faction who did the same on a national and international level is a compelling one.  However, the truth exposes the weak link in the Shield that is Roman Reigns, and when I said that the DVD should be called “The Preordination of Roman Reigns” this is because the major insight to come out of “Destruction of The Shield” is that, while Rollins and Ambrose worked their asses off for years, developing their craft and totting up hundreds of hours in the ring putting on five-start matches, Roman Reigns is an entirely different story.  A college footballer who came from a famous wrestling family, Reigns was thrust into the WWE Developmental system without much experience in the ring and forced to hone his talents as an incredibly green rookie in front of the Florida crowds.  Reigns was protected in short, uneventful matches, where his pure physical dominance and look were the main story to be told and little in the way of technical skill was needed.  While Ambrose and Rollins were stealing the show with innovative matches, Reigns was publically learning the ropes, and by the time the trio got to WWE, the two seasoned veterans played the role of protectors for the big guy, Reigns.  They provided the steak and he provided the sizzle; the three-person format allowing him to continue learning while Rollins and Ambrose took the brunt of the work in each match.
This is not to demean and devalue Reigns’ accomplishments, and he is a vital factor in the success of the Shield.  He has come a long way.  But this DVD set does remind you that in Vince McMahon’s world, paying your dues and being talented count for nothing.  It’s all about “the look” – big, muscular, a lot of power moves.  Reading between the lines of “Destruction of The Shield” you see the story of a man WWE wanted to groom as its future champion.  You see how Reigns was brought in and protected by his team-mates, and how the booking of the Shield was all about establishing his credentials (power-bombing legends through tables, epic solo performances at Survivor Series and the Royal Rumble) so that he can be where he is today: main eventing Wrestlemania despite many fans rejecting him.  Meanwhile his former Shield-mates, far more popular, continue to shine in the undercard and leave us wondering why the company has such poor taste when it comes to crowning champions.

Still, the politics of WWE have no bearing on the quality of this collection, and what a collection of matches it is!  Every must-see Shield match from their run, from their debut at TLC, to their first title victories, to their memorable and emotional encounter with the Rhodes Family, and goose-bump inducing battle with the Wyatt Family, to their destruction of Evolution. Then we get the post-breakup highlights – Seth Rollins’ Money in the Bank win, the two SummerSlam matches, and two matches from various Raws around that time.  However, the true highlight is the wealth of old, unseen matches from FCW and NXT, including Rollins and Ambrose’s classic series of Iron Man matches, Ambrose’s awesome feud with William regal, and an early encounter between all three Shield members in an FCW Triple Threat Match.

This truly is a can’t-miss collection of wrestling matches, and if you aren’t already a believer in the respective members of the Shield being the future of WWE, after watching these DVDs you will be.  Believe that.  And believe in the Shield. Dan McKee