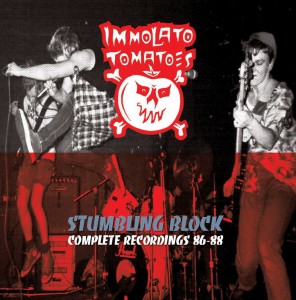 Thanks to Boss Tuneage, pretty much all recordings from the early days of the UK hardcore scene are being reissued and documented – they are slowly but surely building up the hardcore equivalent of the British library! Brighton’s Immolato Tomatoes (the name is taken from an Alan Moore sci-fi comic in case you were wondering) released three demos but never committed anything to vinyl, so this will count as one of Boss Tuneage’s more obscure reissues. Although I was just getting started with tape trading at the time I’ve never heard these guys up until now. I.T. definitely captured the sound and spirit of the time on these tunes. Think uptempo non-metal hardcore that the likes of The Stupids, Jailcell Recipes, Dr & The Crippens or Joyce McKinney Experience were playing – this is a great example of that pure hardcore sound. It is well played and the songs are catchy in the way you would expect. The recordings are of their time, although the first demo is recorded on four track it still manages to capture the sound and energy of the band. This is a musical time capsule, sealed and buried over 25 years ago, to be opened and enjoyed today. Tom Chapman