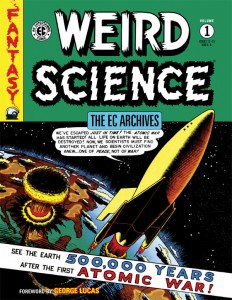 Dark Horse has a habit of acquiring the rights to classic comics from the EC or Entertaining Comics archives. In the past they’ve released collected editions of The Haunt of Fear, Weird Fantasy, and Tales From the Crypt, though I should mention that this is not the first collection of Weird Science Dark Horse has released as Volume Four appeared earlier this year.

Also, I think that I should mention that even though this is Volume One, it doesn’t include the stories that appeared issue twelve, as the first eleven issues in the series were originally called Saddle Romances, and the numbering for the series, way back in the 1950’s, was only reset after issue fifteen was published.

Volume One starts off with two introductions, one by Grant Geissman and the other by George Lucas (though it is actually a reprint from 2006 Gemstone Publishing edition of the volume.)

After that we get into the tales by writers Al Feldstein, who writes most of the stories contained within, Harvey Kurtzman, and Bill Gaines. The artists involved include Graham Ingels, Jack Kamen, Harry Harrison, Al Fieldstein, and the great Wally Wood. Some of the stories include: Man and Superman in which a brother tries to warn his more physical person about the dangers of having too much mass, The Sounds From Another World where Professor Henry Sonotown has found that plant life talks even though no one will believe him, and Lost in the Microcosm where Karl is doomed to shrink forever after being sprayed with an experimental solution, and goes from being worshiped as a God to being attacked by molecules.

I have to hand it to Dark Horse, their devotion to preserving comic books history in order that those have read comics all their life can enjoy, take pleasure from and learn more about the history of comics. While the writing is slightly dated and feels like it’s from the 1950’s and the character’s names are repeated over and over again in the first three to five panels, the stories are a lot of fun and have a real Twilight Zone feel to them, even though the undercurrent of Communist fear is always omnipresent. The art in this collection is wonderful, and unique, as each is story has its own feel and personality due to the multiple artists that originally worked on the comic.

I think it’s safe to say any collection that involves EC is a must have and must read. Campy, enjoyable, historical fun… Jason Bonton