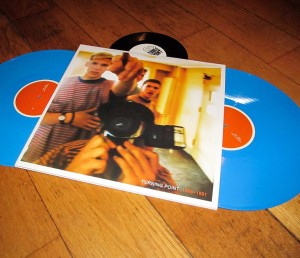 This collection has been released a number of times and I was surprised to read that the Jade Tree reissue is actually 15 years already, so high time these great recordings were given a new lease of life. Turning Point were an East Coast US straight edge band whose sound evolved considerably as they progressed. Starting off with a sound lifted straight from the youth crew blueprint they ended up playing an introspective and melodic style that still sounds incredible to this day. I remember getting my hands on their debut 7″ and it has the same look, feel and sound as the early Revelation releases – stark black/ white artwork with the X displayed prominently, college font logo, the works. The single contained six songs of high energy hardcore with a sound typical of the era – a mix of slow and fast parts, gruff vocals and the inevitable gang back-ups. A perfect match to the likes of Wide Awake or Side By Side and in fact this single is now highly collectible. Fast forward a year and musical horizons have widened. Turning Point has become a lot more reflective, in much the same way that Bold developed from their album to single. The music is a lot more involved, although it does remain fast old school hardcore for the most part. Think of peers such as Vision or Lifetime who also took the core elements of the youth crew sound but added a pile of melody. Moving on still and Turning Point finished on a high, contributing songs to a number of compilations and a split EP with No Escape. Their sound has developed even further with acoustic passages blended with rocky hardcore. This was actually the end of the line for Turning Point. If you listen to their follow-up band Godspeed, you can hear the logical conclusion of the direction TP were headed.

Whereas often on this kind of release the “bonus” live, demo and radio material is pretty throwaway, Turning Point made some incredible recordings for the legendary WNYU radio shows, which I still have on a battered tape in a box somewhere – it’s great to hear those recordings given a fresh airing on here.

This reminds me of when those early DC hardcore bands starting flexing their musical wings – Turning Point started out an energetic youth crew style band but over the recordings developed a unique sound of their own, and this collection documents it all perfectly. Tom Chapman