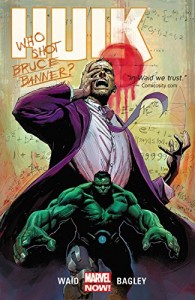 Hulk: Banner D.O.A. – Mark Waid & Mark Bagley (Marvel / Panini)
Remember when JR was shot and what seemed like the entire Western World was on tenterhooks, desperate to find out who the pulled the trigger, gossiping, whispering and offering endless ill-founded theories and ideas about who the assassin was or could be? I know it was a long time ago and all, but surely you remember it happening? You know, JR, the cackling, power hungry, moustache twirling villain from Dallas. Yeah, that guy. Anyway, I didn’t get what all the fuss was about when it happened, and for thirty five years I didn’t understand why people were driven to near furore by a shooting on a television show, but now I do. After the cliff-hanger finale of ‘Humanity Bomb’ in which someone actually managed to shoot Banner in the back of the head without him hulking out, I get it. I finally understand. And since it happened, I’ve been formulating my own ideas, desperate to find out who did and why, and ‘Banner D.O.A.’ has finally provided some of much needed, and desired answers.

‘Banner D.O.A’ is the opening chapter in what I suspect (and hope) will be an ongoing, long-running and far reaching arc, and while it sort of provides the identity of the killer(s) and offers a glimpse at the methodology and reasoning behind the attempt, I suspect that there’s a lot more to it and that we’ll be tantalisingly drip fed the full picture over the fullness of time. But there’s more to Waid’s story than just the who and why, as it also explores the ramifications and impact on Banner’s life, and when he escapes from his captors following an unsuccessful medical procedure and a much need transformation into the not-so-jolly green giant (a change that’s actually quite horrifying and gruesome given the circumstances, the horror of which is conveyed for the most part by Bagley’s stunning artwork), which in turn transforms Banner into a functional simpleton. This is where the action begins, as with Banner at the epi-centre of events, his captors, SHIELD and The Avengers all become involved in the battle for Bruce Banner – and The Hulk’s – mind, body and soul. It’s a fight that forces his friends, allies and previous employers to reconsider all of the decisions and actions they’ve made in relation to Bruce and one that sees the Hulk coming face-to-face with one of his oldest and deadliest foes, and ends once again, on a knife edge. Hurtling along at breakneck speed, ‘Banner DOA’ is the perfect partnership of words and visuals, Waid and Bagley working in perfect symbiosis to craft a tale that’s got everything, or rather everything that you need in a Hulk story. Heroism, an intriguing and absorbing central plot that entangles the other sub-plots and themes to create a whole that’s greater than the sum of its parts, intrigue, double dealing and underhanded scheming all topped with an undercurrent of blacker than black dark humour and generous helpings of mindless violence and smashing. Banner lives, hear Hulk roar… Tim Mass Movement