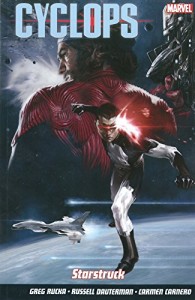 Cyclops: Starstruck – Greg Rucka, Russell Dauterman & Carmen Carnero (Marvel / Panini)
Being forcibly transported through time with no way home has got to be tough on anyone, but if you’re sixteen years old and you discover that your future self becomes an anger fuelled, hate filled monster, hell-bent on achieving his single minded goal regardless of the cost to anyone , else, then “tough” just doesn’t cut it. Caught up in the same nightmare over and over again, every day waking up to discover that reality was even worse, that’s the vicious circle that Cyclops finds himself trapped in. So when his previously “dead” dad turns up and offers to take him far away from everything, he seizes the opportunity with both hands and sets off on a journey to the furthest reaches of the galaxy with the father he never knew. And, let’s be honest here folks, who wouldn’t?

Which is where ‘Starstruck’ begins; with Cyclops living the life of a space pirate with his dad Corsair and his unfalteringly loyal crew of miscreants and ne’er do wells. Having captured a Badoon ship and spurred on by his lover Hepzibah, Corsair decides that he and Scott need some ‘father-son’ bonding time and so they set off in the appropriated craft to get to know each other. In space though, things are never that simple, and after a run in with a band of particularly vicious bounty hunters, Corsair and Cyclops end up crash landing on an unforgiving, hostile planet. Trapped, alone, and with fate snapping at their heels, and death waiting for them, they have to find a way to get off the rock they’ve found themselves on, and they have to do it quickly; which means adopting a lunatic scheme that’ll either end in success or plunge them into the arms of the merciless sons of fortune whose pursuit was directly responsible for their unfortunate situation. Sometimes though, crazy is the only option, and with that in mind, Cyclops and Corsair dig and get ready to face their enemies in their make or break, all or nothing gambit.

On the surface, Greg Rucka’s story is a straight forward, action packed romp with a touch of Defoe and a sprinkling of fifties Sci-Fi thrown in for good measure, that looks as good (thanks to Dauterman and Carnero) as it reads, but once you submerge yourself in ‘Starstruck’ you’ll soon realise that it’s far more than that. ‘Starstruck’ is also a moving, emotive analysis of the often complicated father-son relationship, which in this case is made even more problematic by Scott’s abandonment issues and his father’s guilt, the realisation that no matter how much we want them to be perfect, our parents are as fallible as we are and the universal fears of growing up and mortality. After what seems like an eternity of having Cyclops portrayed as a dour, miserable, joyless creature, it’s refreshing to see him as the hero he once was, full of life and enjoying every second of it in his new playground, the big, bad Universe. And, you know, any story featuring space-ships, exotic alien worlds, swords and bounty hunters that leads to a climatic, Kurosawa flavoured spaghetti western showdown is always going to be a lot of fun. Which is exactly what ‘Starstruck’ is.. Tim Mass Movement