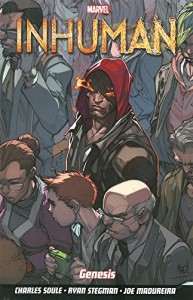 Inhuman: Genesis – Charles Soule, Ryan Stegman & Joe Madureira (Marvel / Panini)
It’s a strange old place, the Marvel Universe. It’s a place where death isn’t necessarily the end, alien invasions and planet ending scenario’s frequently test the mettle of its hero’s and life in all of its wonderful weird mutated varieties thrives, where gods and mortals live side by side in the American Mid-West and the world is only limited by the scope and scale of the imagination and dreams of its creators and inhabitants. And just when you think you’ve finally accepted the majesty and endless possibility that fuels it, a city goes falls out of the sky above New York, landing in the Hudson, making it its new home. But that’s not all, as the city was accompanied by a strange mist, a mist which began to drift around the globe, a mist that caused certain people to change and develop strange new powers. The city was Attilan, home to the Inhumans and the mist was Terrigen, a substance designed to activate latent genetic abilities in a small percentage of the population, a “gift” given to humanity by the Kree many millennia ago in an effort to boost and bolster their super-soldier program. Until Attilan’s “arrival”, those who knew of the existence of the Inhumans thought they only existed in their shining city and remote colonies dotted around the globe, no-one, not even the Inhumans themselves, knew that they lived, unaware of their genetic heritage, among humanity or that there were so many of them. Until now. Until the Age of Inhumanity began. It’s a strange old place the Marvel Universe, but nothing could have prepared it for this.

‘Genesis’ begins in the immediate aftermath, and follows Medusa’s attempts to unite her people, both new and old, and adjust to the life that she now finds herself living thanks to the actions of her husband, Black Bolt (who was directly responsible for unleashing the Terrigen Mists and causing Attilan’s downfall) , the former King of Attilan. Soule’s story see’s Medusa fighting for the souls of the newly “born” Inhuman’s with a rogue member of her species, Lash, who’s philosophy and beliefs are diametrically opposed, and run contrary, to everything she believes in, and if fighting this “war” wasn’t enough she also has to try and ensure that her can people safely co-exist with humanity, playing the diplomat with Captain America in order to guarantee the future of her city and subjects. And while struggling to fulfil her new role and duties as queen, she also sets out to discover what happened to her husband, a man she still believes to be alive even though the rest of the world “knows” him to be dead. It’s a journey that reaffirms her belief in herself as the truth about what happened, why Black Bolt set his people down this new path and his ultimate fate is slowly revealed. And then there’s the attempted coup and the interweaving sub-plots, in which new characters are introduced and their origins and back stories explored before they’re drawn into the fold to become a part of the ever evolving, bigger picture. It’s a complex, and thoroughly engrossing tale that plunges you straight into its fantastic new world, challenging you to sink or swim; a challenge that, like me, I’m betting you’ll willingly accept.

Don’t be fooled by the unrelenting action, the dizzyingly detailed and intricate artwork of Stegman and Madureira or the complex characterisation and labyrinthine plot, because ‘Genesis’ is much more than that. It’s also a critique of Western attitudes toward immigration and change, and illustrates the need to rethink tired old ideas and policies that lock the world in stasis and the kind of tired thinking that will eventually lead to the collapse of humanity as a whole. ‘Genesis’ is an intelligent, involving opening chapter of a story that’s set to the change the face of the world forever. The future has arrived and the future is Inhuman. Nothing could have prepared us for this… Tim Mass Movement