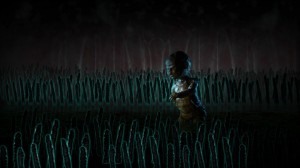 Austin, TX experimental, psychedelic quartet Boyfrndz have premiered an animated music video for the track “Make Believe” via Metal Sucks at this location. The video, which Metal Sucks described as “one of the creepiest, crawliest, shiver-inducing videos we’ve seen of late” was animated and directed by Joshua Mahesh Kost and the song comes from their sophomore full-length Breeder which was released last year via Brutal Panda Records.

The group recently toured with the Chino Moreno led supergroup Palms (also featuring members of Isis) and has now announced two upcoming tours with Caddywhompus and Future Death. A complete listing of dates can be seen below.

Breeder can be streamed via the band’s official Bandcamp page while a music video for the track “Shapeshifter” can be viewed HERE.

Breeder was recorded in late 2013 at Cacophony Recorders with producer / engineer Erik Wofford (THE BLACK ANGELS, WHITE DENIM) and is available on vinyl and digitally. BOYFRNDZ formed in 2011 and have released one prior full-length and a series of EPs.