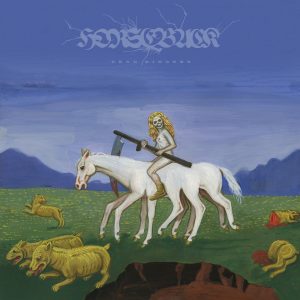 Jenks Miller’s HORSEBACK returns to Relapse Records for the first time since 2012’s “Half Blood”, with a release that furthers his path into experimentalism. Gone are the black metal vocals, instead replaced with Miller’s normal singing voice in a move that’s likely to alienate some fans while causing others to celebrate. Production seems like it’s shifted a gear too, feeling like it’s taken back a notch in order to provide some more breathing space than a lot of doom and drone acts would typically go for. All in all, it makes for an interesting release by one of the genres more unusual acts.

Opening track “Modern Pull” sets things in motion, with an eclectic instrumentation set that sets the path for the rest of the record. Tracks like the “Hallucigenia” series from the previous label release hinted that there was more scale to Miller’s work than your average genre band, but “Dead Ringers” might surprise people with just how different the song writing is to the back catalog. “Shape of the One Thing” in fact bares more resemblance to a late catalog A-Ha track, with a warm, pulsating baseline, soft vocals, and electronic drum beat.

By the time we get to “The Chord Itself”, we’ve left the traditional sound completely behind as we’re surrounded with vocal samples, organ leads, guitar noodling with a ton of reverb and little traditional percussion. The closing track, “Descended from the Crown”, runs an epic 16 minutes long – most of it vocal free, as guitars and baselines loosely intertwine around the clanging sounds of what sounds like mechanical gear at work. Like the rest of the album, it’s calm and laid back, but hints of chaos within.

The ‘one man band’ nature, as Miller writers, produces, and performs all his work, makes for a very personal record each time, and allows HORSEBACK to change sound at the drop of the hat without internal conflict. “Dead Ringers” might not appeal to all existing fans, but at the same time it might bring new listeners in due to the radical shifts in approach. What we’re left with is an album that captures Miller’s moods and progress of a musician at a particular place in time, with only wonder at where he might go next.  James Connors