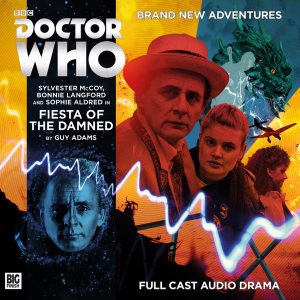 Before actually listening to the Fiesta of the Damned it would only be natural to wonder how Melanie Bush adjusts back into her old life aboard the TARDIS and also how the very successful dynamic of the seventh Doctor and Ace is affected by her return. After all they only had one televised adventure together before Mel left for pastures new with inter-galactic rouge Sabalom Glitz. And indeed Mel and Ace are as chalk is to cheese, both women couldn’t be more different but happily as it turns out Mel has slotted back in brilliantly and it’s great that here in the world of Big Finish there is now more to Mel’s character than the atypical screaming companion that she was portrayed as on television, and a testament to Bonnie Langford at how good an actress she actually is. These days Mel is more than capable of holding her own alongside the headstrong Ace and the two of them actually seem to get on quite well.

But what of the story itself? The beginning of Fiesta of the Damned is really quite harrowing and puts you in mind of the start of Genesis of the Daleks or The War Games as the TARDIS crew venture out into a war torn environment and almost immediately come under fire. Set amidst the backdrop of the Spanish civil war the story is a gripping atmospheric tale with moments of horror, comedy and also genuine affection as Mel strikes up a rapport with Republican Commander Juan Romero and likewise Ace with British journalist George Newman. The Doctor himself is, as usual, brilliantly played by Sylvester McCoy in his own manic, reflective, mysterious and unique way as he struggles to save both the Republican soldiers and the local villagers from an ancient, long thought dead space plague that tears its way through the Spanish countryside infecting the local populace as it goes on its merry way.

Overall the story is both fast paced and tense, with a good dose of suspense and drama thrown into the mix. The supporting actors are all fantastic with moralistic farmer turned solider Juan Romero’s dilemma toward the end of the adventure potentially stealing the show. At first glance 1930’s Spain seems a bit of a strange setting for a Doctor Who story as it’s not really all that well known about what with being sandwiched between World War One and World War Two but fear not, it’s not long before you’re drawn into this well written and beautifully acted pseudo historical. Well worth a listen!  Nath Rixon