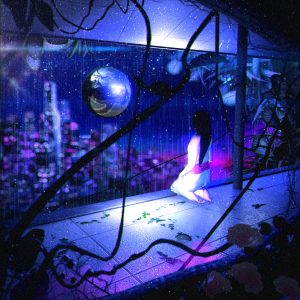 Vaporwave, like many other micro genres, was essentially over before most people even noticed it existed at all. A throwback to the 90s in both art direction and sound, using chopped up and slowed down samples from everything from pop tracks, to TV commercials, mixed with what can only be described as ‘elevator music’, it was never destined to become popular in its own rights.  More scepticism against consumer culture than dancing music, it also had the tendency to end up sounding very similar due to the simplicity in how the music was put together. Much like punk rock, the second everyone realised they could be in a 3 chord band it became harder to separate those who conceptualised the genre from those who merely hopped on it. At it’s best, it was brilliant. At it’s worst, it was derivative and pointless.

As an internet genre, naturally the speed at which things move in and out of fashion moved at a lightning pace, and within several months the original sound and artists had moved on. With offshoots in different directions as more and more people discovered the style, and the arguments as to what is or isn’t even varporwave naturally started, it felt like 10 years flashed by within an instant. All while the general populous never knew, nor cared, about it’s existence.

Following up 2015s “新しい日の誕生 (Birth of a New Day)”, double act 2814 – comprising of UK artists HKE and t e l e p a t h, found themselves in the unenviable position of trying to catch lightning in a bottle for a second time. Relying on original composition as opposed to sample work, 2814 have managed to differentiate themselves from a crowded scene as they mixed the aesthetics and ideals of Vaporwave with more traditional ambient and electronic production.

Relying on more downbeat, instrumental tracks (although there are a few tracks such as ‘Lost In A Dream’ that provide ghostly vocals and has a similar feel to early Burial), each bass hit comes with a massive thump while the synth pads swirl over the top. It’s nothing that hasn’t been done before, but it’s done exceptionally well and helps drag the listener in to the futuristic vision of the producers. More soundscape than a coherent record made up of 3 minute long, individual songs, it works well as a concept record of sorts, with the majority of tracks approaching or exceeding 10 minutes long.

“Rain Temple” is best enjoyed on headphones while walking around the bright lights of your nearest business centre, late at night, while you soak up the atmosphere it provides. Hearing the rain pouring down woven into the music, all it takes is imagining civilian transport flying through the skies with ease, and it might just feel like you’re in Blade Runner. And that’s pretty cool.  James Connors