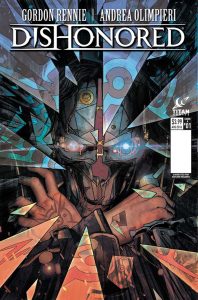 When Bethesda Softworks released the video game Dishonored in 2012, it set a striking image; Corvo, a supernatural ability wielding Royal Protector, wielding his folding sword, setting fiendish traps, casting supernatural abilities and displaying a clear lack bubble-gum while taking down his enemies. I bloody loved it!

Yet it also showed Corvo lurking in the shadows, teleporting among the rooftops, even taking control of a plague rat, to sneak past unnoticed. It was a game that sparked interest with its option to complete the game without a single kill.

Now Titan bring us Dishonored #1. The comic continues 12 years after the events of the game. Corvo, having cleared his name is once again Royal Protector, but has yet to hang up his iconic mask. The mark is first seen shattering through the cover art, along with the familiar magical hand marking.

Once again we are brought back to Dunwall. A whale oil fuelled city, inspired 18th and 19th century London and Edinburgh. The rat plague now gone, but its corruption and gang run streets are still in place.

Corvo has returned, he has grown noticeably older and now questions his “Gifts” from The Outsider. Alongside his duties as Royal Protector he seeks a suitable apprentice to take his place. We aren’t left waiting long before seeing the skills that make finding an apprentice assassin a daunting task. We see the quick pace sword fights and agility that has earned Corvo his reputation. Pleasantly the stealth and strategy is also shown well. Lurking in the shadows, using his “Gifts” to sense lurking guards.

Dishonored #1 serves as a good start to the series; it quickly getting both the familiar and new readers to the same point, waiting to find out more about the potential candidates for the assassin’s apprentice.

While this series is meant to tie in the plot of the first with the upcoming Dishonored Video Game, fan of the franchise or not, Supernatural assassins in a corrupt dark steampunk setting taking down corruption and towering enemies always makes a good read.  Anthony Ennis