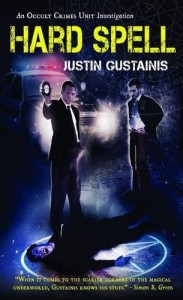 Hard Spell (An Occult Crimes Unit Investigation) – Justin Gustainis (Angry Robot)
Meet Stan Markowski of the Scranton PD’s Occult Crimes Unit
“Like the rest of America, Scranton’s got an uneasy ‘live and let unlive’ relationship with the supernatural. But when a vamp puts the bite on an unwilling victim, or some witch casts the wrong kind of spell, that’s when they call me. My name’s Markowski. I carry a badge. Also, a crucifix, some wooden stakes, a big vial of holy water, and a 9mm Beretta loaded with silver bullets.”

So, monsters are real and the average man needs protecting from them. As central theme and set-up’s go, this is nothing new at all, but the thing is, it works and why wouldn’t it? It’s been proven that if something is done with the correct skill set then it should and often does work to great effect andJustin Gustainis possesses such a skill set. And because of that and being as serious as it is tongue in cheek, ‘Hard Spell’ works and works well, and folks, it’s just top notch. The cops that the story revolves around are OLD SCHOOL, tough guy detectives (think Chandler, Spillane etc.) and the vampires are what vampires should be, none of this emotionally open sparkly crap, just stripped to the bone, simple blood sucking killers, and the supporting cast of other worldy monsters and supernatural creatures are pretty darn cool as well. The narrative itself is delivered entirely from the viewpoint of the main character ‘Markowski’ who you can’t help but root for and the plot twists around more than enough to keep any reader interested, and means that ‘Hard Spell’ works equally as, and should appeal to fans of, both horror and gritty crime novel. ‘Hard Spell’ is a guaranteed win and having Goblins who are nearly always high on crystal meth doesn’t hurt either… Gav