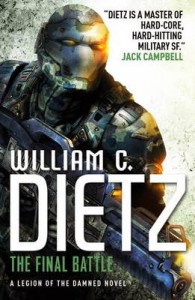 The Final Battle (A Legion of the Damned novel) – William C. Dietz (Titan Books)
LEGIO PATRIA NOSTRA Far in the future, condemned criminals and the fatally ill have two choices: to die, or to join the Legion of the Damned, an elite fighting force made up of human legionnaires and cyborg soldiers. If they enlist, their bodies will be destroyed and their minds implanted in gigantic armored killing machines, programmed to fight for the Human Empire. Decades ago, the corrupt Imperial government was overthrown and the Hudathans defeated. But peace with such an aggressive alien race could not last, and war has broken out once more. The Hudathans, imprisoned on the very planet they devastated, are on the rise—and this time they have a cyborg army of their own.

Having reviewed the first instalment of this series (The Legion of the Damned) within the past few months and telling anybody who would listen about this amazing new novel, ‘The Final Battle’ had a hell of a lot to live up to. Set thirty years on from the original, the Hudathans are back, but this time they have cyborgs of their own to level the playing field. Now, I’m going to set this straight from the start now, The final battle is not as fast or flowing as the original but is much more in depth and gripping. Characters from the original novel are included but have changed with the passage of time which helps to introduce the needed new focal points who come and go throughout. Dietz, once again dislapys his incredible powers of description and his attention to detail is absolutely second to none which ensures that the all too often boring second novel of a series is far from a let-down. If military Sci-Fi is your thing then Dietz is your man. No doubt about it. Gav