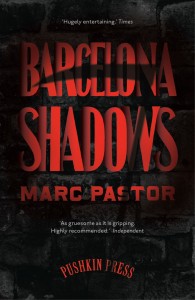 Barcelona Shadows – Marc Pastor (Pushkin Press)
Inspector Moisès Corvo—jaded, dissolute, yet with an uncanny sixth sense—is on the hunt to discover the identity of a monstrous murderer. His pursuit takes him into Barcelona’s underworld, where some very powerful figures will do anything to stop him. He cannot imagine the horror that awaits him.

Barcelona Shadows is a fantasy piece based on actual history, namely the horrible crimes of Enriqueta Martí who was arrested in the early 1900’s. The idea to take and turn these crimes into a fictional horror tale is one of absolute genius and I was geuine;y surprised at what a fantastic job Pastor has done. Using the main character of Inspector Moises Corvo as the focus is a wonderful idea. Corvo is a gritty, downtrodden character, his role is played out exceptionally well and the dialogue does an incedible job of allowing the reader to focus on the events instead of just being overwhelmed with shock and gore; which tends to be the big let-down and almost endemic in most modern horror.
As far as I’m aware, this is the authors first novel and if this is the case then there’s more promise in these pages with many accomplished authors in the genre are capable of producing in their entire careers. His love of the gothic is very apparent and attention to detail is superb. Thoroughly recommended. Gav