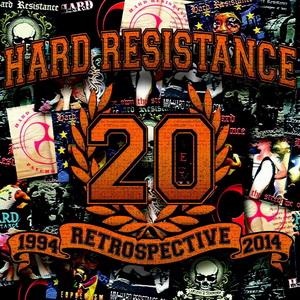 Hard Resistance – 1994 Retrospective 2014 (WTF)
Twenty years of hard-­as-­nails Belgian hardcore. That’s not entirely true as the band went on a hiatus for a few years before returning with their best album ever in shape of ‘Lawless & Disorder’. Still the party is on, and no less than 20 classic tracks have been re-­recorded giving them the sound these anthems should have had from the start. Reaching back from the early beginning, through songs from their ‘Lost & Found Records’ ­era right up to the present day. The sound on the whole hasn’t changed much – metallic hardcore, firmly rooted in classic NYHC. The newer songs do seem to be a lot more focused as the band now knows exactly which triggers to pull for maximum body count. Killer digipak packaging gives all praise to the rich history of this band. Martijn Welzen