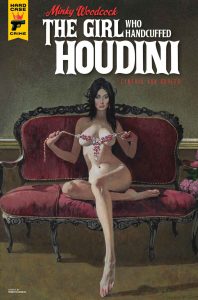 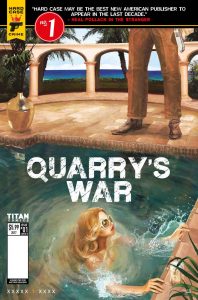 Titan Comics and Hard Case Crime are excited to reveal the next titles from their Hard Case Crime line of comics – Minky Woodcock: The Girl Who Handcuffed Houdini and Quarry’s War!

Created by acclaimed artist, author, director, and playwright Cynthia Von Buhler (Speakeasy Dollhouse, Evelyn Evelyn, The Countess & Her Cats, Emily and the Strangers),Minky Woodcock: The Girl Who Handcuffed Houdini has already garnered praise from legendary author Neil Gaiman (Sandman)who said: “I was seduced by Cynthia Von Buhler’s artwork. She is a wonder.”

Unappreciated at her father’s detective agency, the fabulous rabbit-loving Minky Woodcock straps on her gumshoes in order to uncover a magical mystery involving the world-famous escape artist, Harry Houdini!

Featuring covers by artist Robert McGinnis – the famous creator of movie posters for classic films such as James Bond and Breakfast at Tiffany’s and acclaimed comics legendDavid Mack (Kabuki), the first issue arrives in stores November 8, 2017.

Recently returned from the horrors of the Vietnam War, former U.S. Marine sniper Quarry has found a new vocation as a professional assassin. But when his latest contract turns out to be an old acquaintance from his military days, the fresh-faced hit-man finds himself battling against his own conscience as secrets from the past begin to reveal themselves.