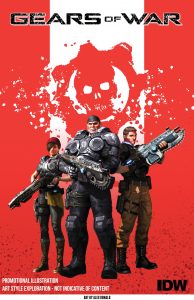 Following last year’s launch of the critically-acclaimed Gears of War 4, the fan-favourite Gears of War franchise is marking its return to graphic novels in 2018.  Set on the fictional planet of Sera, the Gears of War series charts the story of humanity’s struggle against fearsome and brutal adversaries through a captivating tale of hope, comradery, and survival.

“We are thrilled to be working with IDW Publishing to expand the Gears of War universe through comics,” says Rod Fergusson, Studio Head at The Coalition, developers of the Gears of War franchise. “The rich world and characters that millions of gamers have come to cherish is in very capable hands.”

Partnering with The Coalition, IDW Publishing has enlisted the talents of writer Kurtis Wiebe (Rat Queens) to tell new stories inspired by the world-famous games.

“I’m thrilled to be part of this new adaptation with IDW,” said Wiebe. “With the release of Gears of War 4, fans experienced all the classic callbacks to the brutal, over-the-top action and tone they were used to but there was a new dynamic created with the younger generation of heroes in JD, Kait, and Del. That’s the same experience I want for the comic readers. Something that feels familiar but fresh through new, as-of-yet unexplored regions and stories of the Gears of War universe.”

In addition to the news series, IDW Publishing will also re-release the classic Gears of War comics catalog, previously published by WildStorm, allowing fans to revisit and collect the series or discover them for the first time.

Your rendezvous with death kicks off in January 2018 when Gears of War #1 emerges onto the comic book landscape.