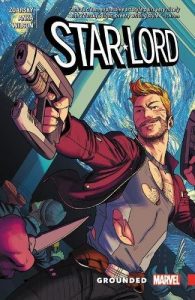 What is it with these outer space folks? Strand them on Earth for five minutes and they bring everything crashing down around them. If I didn’t know better, I’d swear it was because they were missing sailing the solar winds and their lives of high adventure saving the galaxy from all sorts of nefarious ne’er do wells. Or it could just be that being stuck on one insignificant little rock in a backwater solar system is just more than they can bear and they have to do something, anything, to relive the tedium and boredom of feeling like they’re trapped and imprisoned against their will. Which is exactly what Peter Quill, alienated from his comrades thanks to the events of Civil War II and everything that led up to them, alone, left to his devices and supervised by Alpha Flight feels like in New York, which in turn leads to him, while playing the role of hero, making a series of catastrophic life choices that bring him to the attention of the authorities and law enforcement types. While it isn’t the first time that Star-Lord has been clapped in irons, it is the first time that he’s been forced to carry out his sentence, one that in a delicious dose of irony leads him directly into opposition with the forces of jurisprudence, which is just where he likes to, and should always, be.  And that’s just the beginning, as Grounded brings Quill into conflict with Daredevil and Black Cat, sees him making new and unusual friends in the super-villain community, bonding with Old Man Logan, forging a friendship that’ll change his life forever thanks to the court system, pushing Abigail Brand to breaking point, reaching out to one of his old comrades to begin the long and rocky road to redemption and perfecting his skills as one of the best bartenders in New York. Peter’s life, even though he’s stuck on the third rock from Sol, in Grounded is more eventful and colourful than ever, albeit in a much more immediate and personal way than he’s used to.

This right here, Grounded, is how you write Peter Quill. And by you, I of course mean the collective you, that is, everyone and everybody out there and anyone who has ever attempted to write the character in the dim, and not too distant, past. Chip Zdarsky absolutely nails everything that Quill is in this laugh out loud, funny, endearing, heart-warming and action packed story of a man desperately trying to adjust to life on Earth and fit in with the world that surrounds him, but falling short of being able to do so while serving as a guiding light to everyone around him. He becomes more human than the humans who’ve spent their lives being, well human, precisely because he hasn’t had to be governed and restricted by the often idiotic rules that society is built around and because he relies on instinct and the knowing that doing to the right thing is more important than adhering to the letter of the law. Flawless characterisation, an immediate and involving plot, bang on target dialogue and Kris Anka’s cooler than the Fonz on his coolest day, double thumbs up artwork ensure that Grounded is quite possibly Peter Quill’s finest moment. Absolutely brilliant and thoroughly recommended… Tim Cundle