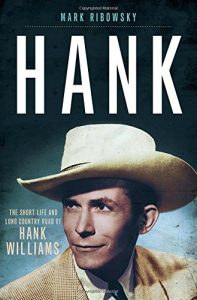 Anyone with a smidgeon of knowledge about popular music will no doubt be familiar with the name Hank Williams, either from the originator of the title, his son Hank Jnr or his grandson the Country Punk legend that is Hank Williams III.

Doubtless they will also be familiar with Hank Snr’s early death in the back of his Cadillac on New Year’s Day 1953 aged just 29. A tragically lonely death brought on by years of alcohol and prescription drug abuse (in addition to Spina Bifida Occulta – undiagnosed for most of his life and which almost certainly contributed to his attempts to block out the pain through alcohol and barbiturates); a scenario we have become increasingly familiar with in the Dr Feelgood related deaths of Rock and Pop stars such as Michael Jackson and Prince.

Sadly as Ribowsky’s meticulously researched biography details, Williams’s life was never destined to be one of joy and happiness despite his successes in record sales, appearances on radio and the Grand Ole Opry, and more widely popularising Country music.

Without pulling any punches Ribowsky sets his sights on the domineering, manipulative figure of William’s mother Lillian Stone (nee Williams amongst others) as the origin of many Hank’s failings, starting with her ruthless ousting of Hank’s father Lon Williams (one of the few sympathetic characters in the Williams story), her greedy attempts to hive off Hank’s earnings and her cold, cruel marginalisation of Hank’s second wife Billie Jean, in an attempt to secure Hank’s earnings – even in his death.

In what appears an almost classic Oedipal choice of partner, Williams first wife Audrey Mae Sheppard (mother of Hank Jnr) reprises the role of Lillie in Hank’s life, while at the same time undoubtedly inspiring some of Hank’s best songs (‘Cold, Cold Heart’, ‘You’re Gonna Change (or I’m Gonna Leave)’, ‘Why Should We Try Anymore’ amongst others).

Ribowsky’s biography is ruthless in highlighting the dysfunctional nature of Williams’s relationships both within his family and with his bandmates and friends, whilst acknowledging the part each played in making Hank Williams the outlaw country legend he became; however the author adeptly balances both the genius of Williams’s song writing, and ability to convincingly convey loneliness and despair with his alcoholism, manipulative and abusive behaviour, and arrogant swagger; placing Williams as a man of his time and place in the mid-20th century Southern American states.

The author refrains from overdoing the more salacious details of Hank’s human failings, instead concentrating on the historical facts of Williams’s life and leaving the reader to make up their own mind about the troubled genius of the man himself.

A well-researched and written biography providing a balanced and ultimately honest appraisal of Country Music’s first star, and arguably the template for many of today’s Rock Stars, in both their successes and tragic deaths. Ian Pickens