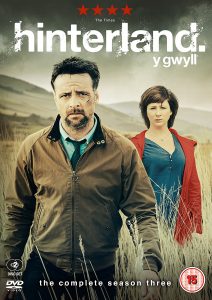 When last we left DCI Tom Mathias, his home (such as it was) was burning to the ground after his recent actions and the perceived slights that they had created caught up with. As series three opens the identity of Mathias’ attacker is an open secret and as he and his squad became entangled in a new series of grizzly and ghastly murders on the windswept, barren west coast of Wales, the underlying arc that has festered and bubbled beneath the surface of Y Gwyll since the very first episode, gradually gains momentum before finally exploding and destroying everything that Tom, and his team have come to know and cling to.

Season Three feels very much like a final act, as all of the dark secrets and hidden truths that have eaten away at the lost and forgotten inhabitants of Ceredigion and the haunted,  crushed souls that swore to protect them from all of the evil in the world and failed, in spectacular fashion, to do so erupt in a maelstrom of devastation and destruction.  This series of the show, while undoubtedly being it’s finest to date and a continuing masterclass in the art of how slow burn thrillers should be done, allows some of the supporting cast to occasionally take centre stage, and while Richard Harrington (Tom Mathias) casts an incredibly long and powerful shadow, Aneirin Hughes (Brian Prosser) and Mali Harris (D.I. Mared Rhys) shine through with their emotive, powerful performances. Both of their characters fates become hopelessly intertwined with that of Mathias as the events of Devil’s Bridge and Tom being investigated as a subject of potential interest in the death of an ex-Police Officer engulfs the three of them.

Hinterland isn’t an easy show to watch, it’s dark, remorseless and relentless and doesn’t shy away from placing the worst aspects of human behaviour under an all-seeing microscope in order to examine them, and all of their associated minutia, in stark, horrific detail but in doing so, it gets under your skin.  It’s black, devious heart slowly creeps up behind you and whispers sweet terrifying nothings and half-truths in your ear while your attention is focussed on the image of itself that it presents to the world at large, and before you realise it, you’ve become dependent on, and have begun to crave, its noir flavoured lullabies. Incredible… Simply incredible Tim Cundle