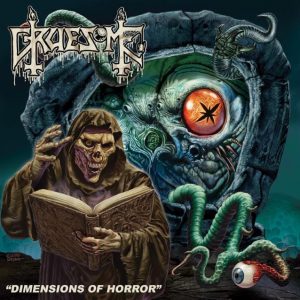 This is a total homage to, and unadulterated worship of, early era Death. Gruesome play and sound uncannily like the Florida pioneers, and ‘Dimensions Of Horror’ thankfully picks up exactly where their astonishing debut, ‘Savage Land’ left off. It’s old school death metal of the highest of calibre. The pedigree of musicianship is second to none, with members of Possessed, Exhumed, and Malevolent Creation gracing their ranks and helping create these six new tracks of brutal heavy metal, that’s carefully crafted and ripened with fantastic production. The likes of Amputation, Raped By Darkness and the delectably descriptive title track speak for themselves, sum up an entire era that many have tried so hard to emulate, but until now, have never managed to successfully accomplish. Death lives, so Scream Bloody Gore and let slip the Gruesome of war…   Mark Freebase

50 Shades of Death.  I can see why this lot are signed to Relapse – there’s a huge amount of ‘Scream Bloody Gore’ era Death worship going on here; which is no bad thing. Six songs in 19 minutes with titles like “Forces of Death”, “Raped by Darkness” and “Amputation” it would be fair not to expect any Emo style introspection. I can’t emphasise how much this reminds me of early Death so if that’s your bag (along with Suffocation, Master etc.) then this is definitely for you.  Ian Pickens