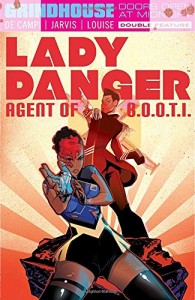 Having grown up in suburbia, the whole Grindhouse phenomena completely passed me by and if I’m honest, it’s something that I didn’t even become aware of until the nineties.  The thought of small cinema’s showing exotic, strange, weird and wonderful B-Movies at all hours of the day spiked my curiosity and fired my imagination, and had I not grown up in the video age, I might have actually have been incensed at the thought that I’d maybe been missing out on something so, well, for want of a better word, cool. But the films that became staple parts of the Grindhouse circuit, thanks to the endless variety of cheap titles available to rent from down at heel video stores, I’d seen, as nothing was more enticing to me than a lurid, cheap cover that promised blood, guts, violence, gore and sex galore. I was, and still am, a B-Feature junkie, and when Doors Open At Midnight Volume 4 arrived, I nearly drowned in a maelstrom of gloriously graphic, off-colour and offensive memories that the succession of sensationalist films I’d consumed as a teenager (and an adult if I’m honest) had filled my mind with.  Here was, and is, a book inspired by the films that had helped guide me into adulthood, and having been immersed in its widely imaginative pages, I have been forced to conclude that author Alex De Campi is my new God. For her words are mighty and her words are great. May her words be praised. Hallelujah and whatever else it is that the devout say when genuflecting before their deities.

Billed as a ‘Double Feature’, Grindhouse: Doors Open at Midnight Volume 4 is comprised of two distinctly different, hugely enjoyable tales. The first, Le Voyage Fanstique De Veronique: Nebulina, is like an acid fuelled head on collision between Barberella, Planet of the Vampires and The Angry Red Planet, in which a pair of scientists exploring Titan, are along with the rest of their crew are attacked by the giant, tentacled indigenous life forms. Rescued by ‘Angels’, they’re then forced to bring life back to dead worlds via captured orgasmic power, get caught in the middle of a prison power struggle and finally turn on their “rescuers” when faced with having clean Earth of life and start the process anew. With a twist ending that’s reminiscent of  seventies short films such as Black Angel and La Cabina, and John Lucas’ glorious Moebius inspired art, it’s a tale that you’ll return to time and time again. And then there’s Lady Danger: Agent of B.O.O.T.I., a “blaxploitation” story that’s part Wonder Woman, part Cleopatra Jones and all ass-kicking, espionage style action, in which the heroine rescues nurses from the clutches of a Chinese Warlord, uncovers a CIA plot, becomes a target for assassination, attempts to have some semblance of a personal life and helps save her neighbourhood from the police and the vengeance of her recently vanquished foe. It looks great thanks to the crisp, clean, razor sharp, fluid, flowing pencils of Mulele Jarvis and reads like the lost, but not forgotten, thriller classic that it is.  You know what time it is? It’s time for the doors to open, so grab some popcorn and get comfortable, because the show is about to begin. After all, it’s always midnight somewhere…  Tim Mass Movement