Warning: preg_match() expects parameter 2 to be string, object given in /var/www/vip4/sites/vip6102689/httpd/htdocs/wp-includes/formatting.php on line 4866
 Doctor Who: The Churchill Years: Volume One - Mass Movement
x
Spread the love 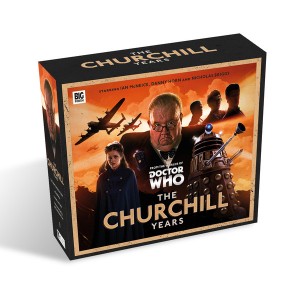 History, as someone famous once said, is written by the victor and there are few figures in the recent past remembered with the same fondness and high regard as the man who many consider as being at least partly responsible for the outcome of World War II, Winston Churchill.  So, it was only a matter of time before he crossed paths with the Doctor, and having been introduced to Who mythology in Victory of the Daleks, it soon became apparent that the Timelord and the Prime Minister were old friends.  However, as is the case with many of the Doctor’s relationships (mainly due to his hopping about in time) which are often initially forged in the middle of some crisis or another, while they’re close, their friendship isn’t exactly straight forward. In fact, it seems to mainly consist of the Doctor rescuing Mr Churchill from one calamitous event after another by pulling his fat out of the fire as and when required to do so. This, if Winston Churchill’s account of his experiences is to be believed, seemed to happen on an alarmingly regular basis.

Beginning, as you’d expect, in the middle of the Second World War, The Churchill Years starts with the discovery of a mysterious artefact on the Thames shoreline. An artefact that exponentially, and briefly, increases the intelligence of anyone who comes into contact with it before rendering them comatose. Judging the object to be important to the war effort, in The Oncoming Storm, Churchill has it brought to him, only to discover that he isn’t the only one interested in it, and as the other party circles the prize, it’ll take a miracle, or the intervention of an old friend to save the day. Even though he’s a rational man, even Churchill can’t explain the mysterious giant canine that he seems to be haunted by in Hounded, which prompts his ever dependable secretary to secure the services of the Doctor in order to help him. But nothing about the ominous spectral dog is as it seems to be, and in a riveting adventure involving espionage, the “spirit” world, betrayal, treachery and sacrifice, the Doctor, Churchill and his secretary find themselves fighting for their lives and the future of England. Following the War, the now ex-Prime Minister embraces his passion for the past through literature and embarks on a writing career, so when the Doctor and his new companion Kazran Sardick arrive and offer him the chance to travel through time, he elects to visit Ancient Britain, hoping to meet his hero Julius Creaser.  Arriving at their destination, the Doctor is removed from proceedings by the Tardis leaving Kazran and Winston to try and stay alive in the middle of the conflict between the Romans and the Celts that, in Living History, they find themselves mired in.  Used to war, Churchill rolls up his sleeves and digs in, but reckons without the intervention of an old enemy, who having been trapped by circumstance is determined to escape no matter what it costs.  Having had previous experience of this worthy foe, and having been “abandoned” by the Doctor, it’ll take every ounce of cunning that Mr Churchill has if he wants to survive and return to the dear old Blighty that he knows so well.  Then in his final adventure, for now at least, The Chartwell Metamorphosis, Winston worried about his mortality becomes entangled, and a pawn, in a dastardly alien plan, in which the goals of the aggressor are surprisingly familiar, and having been drawn into its epicentre, it falls to the Doctor to once again save the Earth, and his friend.

Told from Winston’s perspective as he recounts his experiences in his twilight years, The Churchill Years is an intoxicating, rip roaring combination of drama and narration. Exquisitely written and featuring a perfect blend of pace and plot (and a number of delightful references to the fiction and films that influenced, and had a bearing on, each story) and a scene stealing, star performance by Ian McNeice, The Churchill Years is a more than worthy entry, and addition to, the mythology and canon of the Whoniverse.  Tally ho! Tim Mass Movement