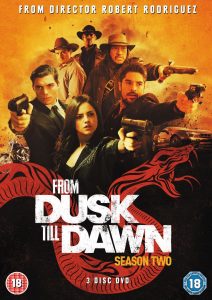 When the first season of From Dusk Till Dawn drew to a close, it ended in roughly the same way as the Robert Rodriguez and Quentin Tarantino film on which it was based. And yes, the fates of a couple of the main characters were vastly different, as some of them made it out alive while some of them ended the series being not so alive, but not completely dead either. As a whole though, its source material (greatly expanded for the series I should add) was entirely used up when the end credits began to run on the last episode.  So, as Season Two begins, all of the players were in, as far as the shows fans were concerned, uncharted and unexplored waters and literally anything could happen, which, of course, led to the inevitable question. Left to its own fate, would From Dusk Till Dawn sink or swim? Would it, as a lot of its protagonists are so fond of doing, suck or would it strike out on its own and forge its own mythology and path to cult status immortality? Okay, let’s be honest, with Robert Rodriguez at helm, Series Two was never going to tarnish the legacy of its ancestry, but whether or not it could stand shoulder to shoulder with it, well, that was the elephant in the Mesoamerican temple shaped room.  Normally I don’t believe in spoilers, but after spending seven and some spare change straight hours glued to the screen with my jaw on the floor, I’m going to break my golden rule and spill the beans. Not only does Season Two stand toe to toe with the show and film(s) that came before it, it batters them into submission, rips their hearts out and feasts on their flesh.  Yeah, it’s that good.

With Seth and Richie having parted ways at the end of the previous season, the former driving off into the sunset with Kate and the latter setting off for a life of who knows what with Santanico Pandemonium, Scott having become a Culebra, Carlos lost in the Labyrinth and Ranger Gonzalez having finally made it home, Season Two kicks into high gear from the off ensuring that all of their destinies once again become entwined in an intricately plotted, deliciously vicious and brutal plot that sees each of them become entwined in the machinations of Amancio Malvado, one of the Nine Lords. Over the course of ten episodes, it doesn’t take its foot off the gas, as its “heroes” battle addiction, base desires and each other’s wonderfully complicated agendas before bowing to the inevitable and fighting the “good fight”, uniting (sort of) to wage war on Malvado. But because this is From Dusk Till Dawn and nothing in it is ever straight forward or simple, the battle ends up being fought on two different fronts, as the Gecko’s, the Fullers, Santanico and Gonzalaz also have to stop the now crazier than a starved vampire trapped in a room full of garlic, Carlos from taking over the world and ushering in a new age of darkness.  It’s a savage combination of late night seventies cops versus robbers thriller, the best of grindhouse cinema and b-movie horror spectacular that thrives thanks to its myriad of sub-plots and diamond hard, razor sharp dialogue and characterisation; and it keeps you guessing right up to the end thanks to its never ending succession of twists and turns and blood soaked, gore splattered betrayal and double crosses.  Oh, and did I mention that Danny Trejo, Jeff Fahey and Demi Lovato join the cast, and indelibly carve their characters’ names in to the From Dusk Till Dawn ledger, this season? I didn’t? Well, they do and each of them adds a little something extra to an already jam packed story.  Senor Rodriguez, es magnifico… Tim Cundle