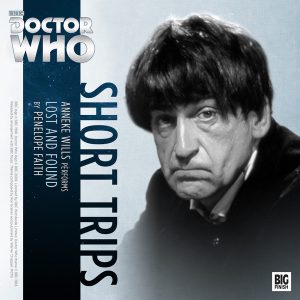 I’m going to begin this review by saying a massive ‘thank you’ to the women of Doctor Who. This story has been beautifully written by a woman (the horror!) and is narrated by none other than Anneke Wills, who played one of my favourite early Doctor Who companions, Polly. Wills has beautifully crisp diction and a Joanna Lumley-esque voice that I could listen to all day. She does a mean cock-er-ney accent too. Girl Power!

Gender shout-outs aside, this has clearly been written by someone with an innate love of the second Doctor, and to this end, frames him perfectly. Yes, he plays his recorder, yes he blusters and bumbles about, and yes, by using these tropes alone we know we’re adventuring with the second incarnation. But the writing absolutely nails Patrick Troughton’s interpretation when I hear lines like ‘the Doctor was shifting bricks like a puppy digging a hole’, because Troughton’s is the only incarnation I can imagine doing such a thing. Well, Troughton and possibly Matt Smith…

So what do we have here? Well, the story is set just after the Second World War, with most of the action centred on Hendricks Department store (which we last saw being blown up by the Doctor’s ninth incarnation back in 2005). We have a story set in a familiar place (London), but a London that harbours tins of sentient baked beans, where we see one Ben and two Pollys (yet no Blinovitch Limitation Effect. I wonder what the Fifth Doctor would have to say about that?), and where one little girl’s lost teddy bear could be the solution to a terrifying problem.

Did I mention that this story is also bonkers? Well, it is. Properly bonkers. If you don’t believe me, here’s another standout line from Penelope Faith’s joyous script:

“What she’d heard and what had frightened the tin of beans was exactly the same thing.”