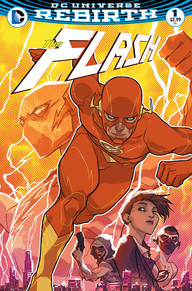 Now that the initial impact of Rebirth’s world changing storyline has begun to subside, the effects of its events have begun to take control in the DCU, with individual titles following its lead and adapting to the “new” world that they’re now a part of. As it was a Flash who reinstated the old order in Rebirth, it’s somehow oddly appropriate that one of the first books out of the superhero stalls is The Flash #1, although the speedster occupying the limelight this time is Barry and not the nexus of the Rebirth, Wally. The noir flavoured, gritty artwork of the book, courtesy of Carmine Di Giandomenico and Ivan Plascenia reflects the reality of Barry’s professional life as a CSI and adds depth to Joshua Williamson’s story that sees it’s hero musing about his life both in and out of costume, while exploring his relationships with some of those closest to him and his role in helping solve the mystery of the missing decade. It’s an intelligent, considered take on what it means to be a hero in this new world and features a classic cliff-hanger climax that leaves you desperately wanting to know what happens next. 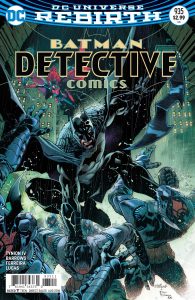 In Detective Comics #935, James Tynion IV continues the Rise of the Batmen storyline with a consummate and professional ease that immediately draws the reader in to the personal lives of the last line of defence heroes that Batman and Batwoman are training. Involving and dramatic, but with enough humour to make even the most ardent of Dark Knights crack a smile, it’s detailed characterisation combined with Eddy Barrows, Eber Ferreira and Adriano Lucas’s hyper-detailed art leads its audience in one direction, before it stamps on the brakes and throws a magnificent swerve into the mix. And that final panel, well, it’s the worth the cover price alone. Pure Bat-dynamite. 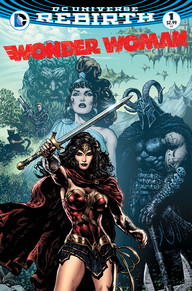 Meanwhile, in Wonder Woman #1, the Amazonian Princess’ quest to rediscover her home and bring to an end the ever-changing story of her life brings her into the same theatre of operations as her old beau, Steve Trevor. As his superiors question her presence there and his loyalty, Diana continues to try and find out who she is. Greg Rucka’s story, and Liam Sharp and Laura Martin’s outstanding art have, over the space of two issues, made sure that this book is a must read. Where it’s going to end up going and what its eventual destination will be, is still something of an enigma, but at the moment I’m just enjoying the ride. I suggest you do the same, pick the book up, get in at the beginning and establish your bragging rights, because this book is about to rocket skywards and there’s nothing quite like (expect maybe that first cup of coffee in the morning) the smug, self-satisfied feeling of knowing you were into before any of your friends were. 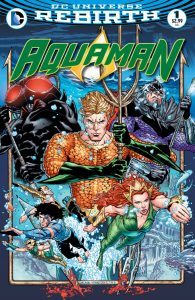 I’m one of those people who likes to save the best till last and that’s why Dan Abnett’s Aquaman #1 has taken that spot.  Charting Arthur Curry’s continuing obsession to make peace between the land and sea dwellers, Abnett’s tale finds the Atlantean embassy opening its doors to the press and a host of newly appointed liaisons, only to have the party ruined by the last person Aquaman would ever want there, Black Manta. Having finally revealed his hand to the subject of his lust for vengeance, Manta unleashes hell on his Atlantean foe in a cacophony of colour filled, meticulously illustrated (thanks to the wunderkind team of Brad Walker, Andrew Hennesy and Gabe Ellsworth) action packed pages. Like I said, I saved the best until last and straight in at number one with a bang: it’s Aquaman.  So far, it’s the crowning glory of the reborn DCU.