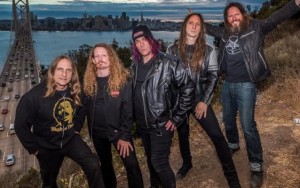 When the opportunity came up to interview Exodus at their recent Cardiff show MM jumped at it. One of the most intense and uncompromising original Bay Area Thrash bands, and one of our favourites (consistently making MM contributors Top Thrash Band/Album Lists), Exodus have stayed true to their brand of Pure Bloody Thrash for over 30 years . MM caught up with vocalist Steve ‘Zetro’ Souza (Z). 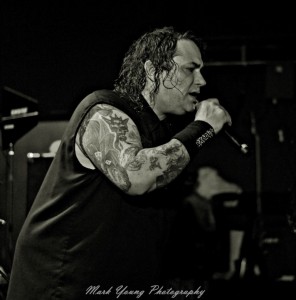 MM: Thanks for taking the time out to do this. How’s the tour going so far?

Z: It’s going great. Good crowds. Some intense crowds at the smaller shows with maybe 12 people in the pit and then at the bigger shows, like the festivals, you can have 100s.

MM: It’s a pretty extensive tour; how do you guys stay sane on the road and keep the energy levels high?

Z:  <Holds up Beer Bong> …This, watching horror films – I got all the episodes of ‘Dark Shadows’ with me. You try to sleep as much as you can; and never lose sight of what you are fortunate enough to be doing for a living. Think about the people who would love to be in this position. You cannot take this for granted. I hit the fuckin’ lottery in my eyes, you know… I’m doing what I dreamed of doing as a kid. I try and eat a few hours before we play. I can’t eat just before. I’m an aggressive Heavy Metal singer… unless the front few rows want to be covered in risotto I gotta eat early <LAUGHS>

MM: Why do you think the band has consistently held on to its fan base when many other bands from that first generation of Thrash/Speed bands either moved on to more commercial territory or saw their fan base diminish?

Z: I think it’s because we’re all really big fans of our genre. I was there when this was invented. I don’t care about who got credit for inventing it, or who’s getting credit for it now; I lived in the Bay Area before I even formed Legacy, which is now Testament. I lived there and this (meaning Exodus – MM), this (banging fist on table) is the band everyone wanted to be in. Every band wanted to emulate Exodus. Metallica wanted to be Exodus. You understand? Regardless of who got where – I lived it; I was there, and this is the band everyone wanted to be like.

MM: I was talking with Tony Slug from the Hardcore band BGK a while back and he described Exodus as one of the only metal bands worth listening too; why do you think the band had such a successful crossover appeal to the Hardcore punks?

Z:  Because it’s brutal. Pick a song that’s not brutal. Tonight the slowest song will be ‘And Then There Were None’ off ‘Bonded By Blood’. That is the slowest song. Last night Machine Head was here right? Did you guys see that?

MM: Yeah, they were excellent…

Z: 3 hour show right? Do you think we could do that? By an hour and a half the audience is fucking dead already. We don’t bring the lights down, there’s no drum solo… And those are my boys. Phil (Demmel – Machine Head guitarist) and me live in the same town. We were in our first band together in 1983… but MH are like “We’re gonna bring it down a bit here…”. We don’t bring it down. There’s just 90 fuckin’ minutes of this <back smacks his hand>. That’s the way it is. 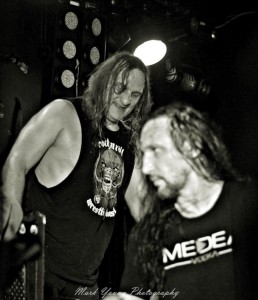 MM: Lyrically Exodus have always been one of the most uncompromising thrash/speed bands; do you feel that the lyrical content may have impacted your ability to gain more mainstream appeal? Is that something the band even wanted?

Z:  You know on ‘Force of Habit’ we kinda tried to do a more commercial sounding record. It didn’t work for Exodus. Capitol Records had a plug up our ass – “Hey we need to market something. You guys are in a $3 million record contract  – we need to market something”. We learned later on in life that major labels are not the place for Heavy Metal. Not at all, and any of us that went there died a dog’s death. The bands that survived were still on labels like Roadrunner – labels that knew what to do with them

MM: And obviously the label you’re on now Nuclear Blast…

Z: Oh absolutely. They’re the best in the world. Nobody does Metal better than Nuclear Blast.

MM: Do you think the new wave of Thrash/Speed bands like Municipal Waste kick-started the genre?

Z: I don’t know about kick-started it but they definitely helped. The initial, I don’t know – 8 -10 bands that originally did this, from Metallica to bands like Destruction and Sodom stayed true; and not one of those Thrash bands has put a shitty record out. Nobody put one out where people could say “Oh this sucks, they’re just going through the motions”. I don’t think you could say that about Megadeth, about Anthrax, about Slayer; you can’t say that about Testament, Death Angel. Even the German bands Sodom, Destruction, Kreator. They are constantly putting out the music that they initiated…

MM: Talking of Germany – will you be playing many European festivals on this tour?

Z:  Yeah, we’re playing Metal Daze, Metal Camp, Summer Breeze; we’re on like 20 different festivals. Last year we did the May/June festivals, this year we’re doing the July/August festivals and that will wrap up the album cycle for ‘Blood In, Blood Out’ over here. The we’re planning on writing a new record…

MM: I was going to ask if the new album is now on hold with Gary (Holt – guitarist) touring with Slayer?

Z: Well Slayer are gonna be working for the next couple of months and we’re on the road for March, then June, July and into August – we’re touring pretty much constantly. We’ve played, I think 196 shows since I re-joined the band, so that’s 196 shows in less than two years. I think we’re gonna take a break after this bunch of shows to write. Gary’s gonna be home, and he’s already spoken to Tom (Hunting – drums) about putting riffs together. In October 2017 the albums gonna be 3 years old so uh.. New Blood… 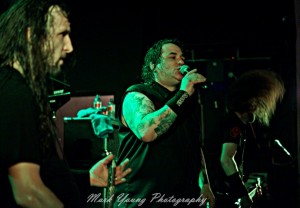 MM: That’s the next album title right there – ‘New Blood’

Z: <LAUGHS> Yeah – we’ll find a way to get ‘Blood’ in there somewhere…

MM: Were there any thoughts of postponing this tour while Gary was away working with Slayer?

Z: No, No. We’d never be able to work, ever. I haven’t played with Gary for almost a year now. Kragan (Lum – Live Guitarist) has been filling in mostly. 11 months ago we put out a record and then Slayer put ‘Repentless’ and they’ve been balls on touring that record since then; so there wouldn’t be an Exodus tour if we had to wait for Gary. Both bands seem to play off each other since Gary’s been involved in Slayer. Next year won’t be as busy, Slayer will probably go hard for another year-year and a half and then cool things down a bit. Gary spoke to Tom when we were home for about 15 days after the South American tour and said we’d get together in April/May next year…

MM: So it’s all systems go on the new record…

Z: Yeah – this was never like “Let’s get Zetro back, do a new record  and say Goodnight”. Fuck THAT. I’ve got my shit back. Let’s fuckin’ do this! We’re in this for the long haul; for the duration.

MM: What’s next for Exodus?

Z: We got the festivals, and then we come back again in November/October on a ‘package deal’. I wish I could tell you guys… I so want to open this package right now, but they won’t let me… the line-up is fuckin’ killer. You guys are gonna love it. 3 Bands that work well together, that you’re gonna go “I gotta see that show”. They’re gonna announce it anytime now, it’s just the other two bands gotta lock in before they announce it…

Z:  It’s pretty much there, but one little thing could change and  then I look like the asshole <LAUGHS> but for a Heavy Metal fan who stills like his Metal HEAVY… it’s gonna be a good one. 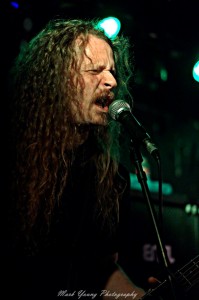 Z: Stay Heavy. This is our music. Nobody told you to like it. You like it because something resonates in your body with it. You don’t listen to it because somebody tells you it’s ‘cool’. I’m 52 years old – I don’t think anything is ‘cool’ <LAUGHS>. I do this because I love the music. Truly love it.

MM: Thanks for taking the time out to do this Z and sorry for the Dictaphone issues at the start.

We did. They killed it.

“Blood In, Blood Out” is out now on Nuclear Blast Records