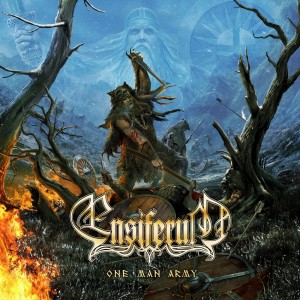 Ensiferum – One Man Army (Metal Blade)
There are significant moments in everyone’s musical history, game changing releases or shows that define and change the way they, you, me, view music and listen to it. ‘One Man Army’ is one of those moments. Okay, so long-time readers already know that I’m a HUGE Ensiferum fan and pretty much mark out for anything and everything that the release, and as such I understand if you’re a little reluctant to take my word for it. But, believe me folks; if you have even a passing interest in heavy metal, you need this record in your life. You really do. It is, without a shadow of a doubt, the pinnacle of their career thus far, being rammed full of anthemic metal built around choruses that you’ll be singing along with within seconds of hearing them (choruses that stay with you long after the record has finished) and melodies that infect and lift your soul. From the opening, pulse pounding salvo of ‘Axe of Judgement’, through to the final, beautiful moments of ‘Neito Phjolan’ Ensiferum don’t put a foot wrong, delivering a metal masterpiece par excellence, and you have to hear the incredibly catchy, and strangely fitting, bridge in ‘Two of Spades’ to believe it. I swear, one spin and you’ll be hooked, seventies style. Oh, and make sure that you get the two CD digipack version. Trust me kids, the ‘Bonus Song(s)’ are essential. Are Ensiferum the best metal band in the word? Probably. Is ‘One Man Army’ the best metal album of the year? Definitely. And it’s only February… Tim Mass Movement