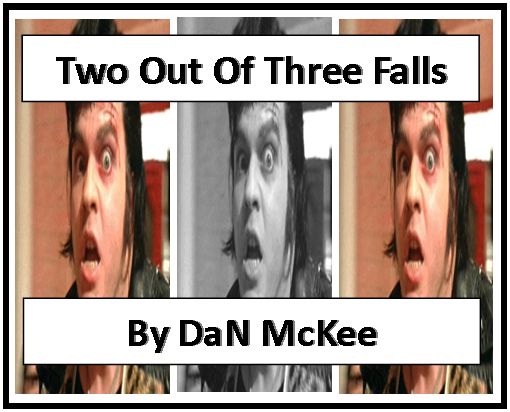 It’s taken me a while to get my thoughts together about the Royal Rumble which took place last weekend. After one of the greatest title matches in WWE history took places between Brock Lesnar, John Cena and Seth Rollins, I couldn’t imagine anything ruining the great mood I was in as my wife and I sat watching the remainder of the event on the WWE Network.

It started so promisingly too! The return of Bubba Ray Dudley was a nice surprise, and it was even good to see The Boogeyman do his one-shot freak show for a few minutes. Bray Wyatt’s early dominance was refreshing and shocking in equal measure. Could this really be his year? As the Rumble match progressed, I was becoming a believer.

But here was the thing: I couldn’t really believe. Because we all knew Roman Reigns was going to win this year’s Royal Rumble. Because that was the word coming from backstage at WWE since sometime last year. Indeed, since Brock Lesnar first beat The Undertaker at last year’s Wrestlemania, the collision had been preordained: Lesnar would win the belt, Lesnar would dominate, and then Roman Reigns would reach his ascendency and knock off The Beast at Wrestlemania. When I heard the plans back then, that sounded pretty decent. Except, even then I was worried. Because Daniel Bryan had just won the title after such a hard fought battle to get the opportunity to do so and I didn’t like the idea that his title run had such a clearly restricted time limit. He deserved a big run with the belt, but the need for Lesnar to make sense of his being the first person in two decades to defeat the Undertaker at Wrestlemania – that he would be the number one guy in the company – was clear. And if Reigns was going to usurp him at Wrestlemania, the victory had to be big, a long time coming. So as soon as Bryan stood holding the title aloft at the close of Wrestlemania XXX, the clock began to tick on the inevitable Lesnar confrontation and defeat.
As fate would have it, Bryan was defeated by his own body rather than The Conqueror, Lesnar. A severe neck injury saw him stripped of the title and the inevitable Lesnar victory had no part in it, allowing WWE to nicely put the belt around him at Summerslam and prepare for Reigns without derailing Bryan’s momentum.
But even then, by Summerslam, the idea of Roman Reigns as the top guy in WWE no longer felt right. 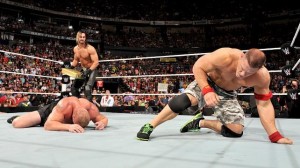 When the plan had first been tentatively raised, it seemed reasonable. Reigns was hot as a member of the Shield, and it seemed likely that when the group broke up (as all good wrestling stables do) the Samoan would be the clear fan favourite with his awesome Spear and Superman Punch crowd-pleasers.

But something happened.
Seth Rollins destroyed The Shield with a steel chair, and when we thought our hero to emerge from the ashes would be Roman Reigns, instead we found Dean Ambrose setting arenas on fire with his unhinged personality, quirky promos and high intensity. As Seth Rollins eased nicely into his new heel role – his in-ring ability always solid – it was Dean Ambrose who sought vengeance on his former partner and won our hearts while Reigns found himself lumbering around in the vacant title scene. Rollins and Ambrose caught fire with wild brawls and brutal gimmick matches. Rollins found himself the new “Mr Money in the Bank” as he climbed the ladder to success. Meanwhile Reigns looked green in his own MITB ladder match, and his inability to win made him look weak. A month later, at Battleground, Reigns looked even worse in his go-nowhere fatal four way against John Cena, Kane and Randy Orton. While Rollins and Ambrose tore the house down at Summerslam in a frenzied Lumberjack Match, Reigns drew yawns in a tedious match with Randy Orton. Then, as had happened to Daniel Bryan, Reigns’ own body turned against him. An incarcerated hernia took him out of action before Night of Champions and put him on the disabled list. 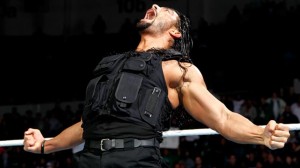 The writing should have been on the wall here, and WWE creative needed to be listening. Daniel Bryan, out of action since May, remained a hero to the fans even in his absence. When he appeared on TV to hand over his title or support his wife, Brie, crowds went wild for him. The first notes of his music caused seas of “yes” chants across the WWE Universe. When Reigns joined us via satellite to report on his injury, no-one cared.
Meanwhile, Rollins was gaining heat wherever he went as a scheming heel, and Ambrose, despite losing his feud to Rollins and losing his feud to Bray Wyatt, never failed to ignite a crowd.
The brutal fact of the matter was that Roman Reigns had failed to get over with the fans once outside of the safety net of The Shield whereas Ambrose and Rollins excelled. The injury only made it worse, and his eventual return was greeted only by roars of apathy. Cartoonish promos only added to the woeful crowd reaction.
Then, the Royal Rumble looming, Daniel Bryan surprised us all by announcing his return to action, and his desire to win the Royal Rumble and go on to Wrestlemania to win back his title.
To my mind, and the mind of the loyal fans who had been watching Reigns flounder since the previous Spring, it seemed absurd to imagine WWE would be sticking to their original booking plans now. Reigns/Lesnar no longer had the sheen it once did – times had changed and things had moved on. As we reached the Royal Rumble there was a whole host of far more exciting possibilities:
Daniel Bryan wins, and goes on to have the ultimate David versus Goliath match against Brock Lesnar to regain the title he never lost.
Dean Ambrose wins, unstable, fearless and beloved by all. He scratches and claws his way to victory against Lesnar only for his former Shield-mate, Seth Rollins to cash in his Money in the Bank contract against him and screw him over once again.
Dolph Ziggler shocks us all by defying The Authority’s attempt to keep him down and winning the big one, earning his main event spot and the title match not a single fan could help but believe would be, at last, his long-deserved push to the top of the mountain.
Bray Wyatt takes the Rumble by storm and shows he is afraid of nothing, not even a Beast.
The Undertaker returns, wins the Rumble and we have a ‘Mania XXX rematch: “last year you took my streak, this year I take your title.”

But last year exposed the Rumble for what it really is – just another dull and deliberate step on a predictable road to a Wrestlemania that has nothing to do with pleasing fans and everything to do with fulfilling whatever preordained deals have already been made. Last year, Batista had been brought back to fight Randy Orton. That was the plan. And against all sense, that plan was executed despite no one wanting to see the match. This year, it is Roman Reigns Vince wants to see at Wrestlemania, and so Reigns it is, regardless of who has actually worked hard all year to earn the fan’s respect and the empty reactions he is getting when he fights.

The lack of unpredictability and excitement has made recent years’ Rumbles foregone conclusions, tarnishing the reputation of this once thrilling event and leaving a sour taste in everyone’s mouths. It is not that people hate Batista, or that they hate Roman Reigns. It is that they knew Reigns and Batista would win their respective Royal Rumbles months before the match even began and were disappointed that such a crucial secret could be so carelessly leaked.
As I said above, there were at least five other perfectly decent candidates for winning the Royal Rumble and any one of them would have sent the fans home happy. And I would go further and say that we would have remained happy even if, between now and Wrestlemania, they had somehow lost their coveted title match and got involved in some other feud which still left Lesnar versus Reigns as the new main event at Wrestlemania. The key principle here is that we want to be surprised by the winner of the Royal Rumble, not be able to call it way back in November!

Roman Reigns doesn’t have a part in an upcoming Marvel movie franchise to undo the damage of WWE’s weak booking as last year’s casualty, Dave Batista, did, but I’m sure he and Lesnar will have a fine match at Wrestlemania in the end, and I have no doubt that Paul Heyman will do everything he can to make me care. Hopefully Daniel Bryan and Dolph Ziggler will steal the show, Bray Wyatt will make history with The Undertaker, and Triple H will put on a great show with Sting. All of that – though known months in advance – sounds fine to me. But until WWE keep their Royal Rumble winner a better kept secret, that event is going to continue to be diminished by booing and frustration and kill the careers of the company’s handpicked heroes. DM