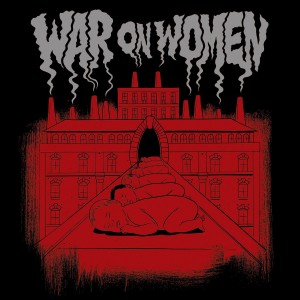 War On Women – War On Women (Bridge Nine)
Probably my favourite Bridge Nine release in quite a while. Full of vitriol and focused aggression; it’s Riot Grrl with as much emphasis on the music as on the lyrics, with more than a few nods to Thrash minus the ‘Meathead’ lyrics traditionally found in that genre and a catchiness missing from a lot of punk/Hardcore releases (I guess in that respect they’re not a million miles away from Propagandhi). Lyrically the band address the many faces of institutionalised sexism and patriarchy with a mixture of subtle, direct, humorous and downright ferocious references, not afraid to call out other feminists for their avoidance of Transgender issues on the sublime ‘Second Wave Goodbye’ and the brutally honest anti Rape-apologist ‘Say It’. Excellent stuff. Ian Pickens

War on Women – War on Women (Bridge Nine)
Have you ever been smashed in the face by a hammer, or pummelled into submission by a brutal sonic attack? You haven’t? Well, you’re about to be, as War On Women pull no punches, and offer no mercy or quarter, hitting hard and hitting fast with their Dag Nasty meets Fugazi meets The Rollins Band with added Touch & Go power, patented brand of punk rock. ‘War on Women’ is everything HC should be, loud, furious and catchy with thoughtful, angry and intelligent lyrics delivering a clear message to an audience ready and able to absorb and embrace everything the band represents and conveys through their music. With enough musical energy and muscle to flatten entire cities, War on Women are ten thousand watts of screaming hardcore ferocity and venom and they sound incredible. It’s retaliation time… Tim Mass Movement