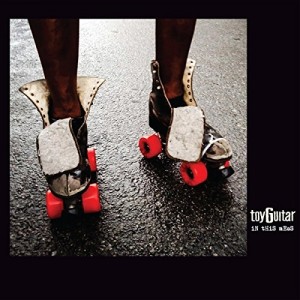 ToyGuitar – In This Mess (Fat Wreck)
OK, so toyGuitar is the current baby/ side-project of Jack Dalrymple and various others. Knowing that Jack has been responsible for creating some incredible music with bands like Swingin Utters, Dead To Me and One Man Army, I was immediately going to pay attention to this one. And whilst it is different to all of the above, this is a great album from start to finish. Starting off bold and brash with “Human Hyenas” reverb drips off the drums, the treble turned right up on the guitars and the rumble on the bass, this sets the tone for the garage/ early punk influenced sound. But by the third song “Is It True” you hear a much cleaner guitar sound matched with passionate vocals and you detect a real pop sensibility that underlies this record. Touches of Bowie or even the Beach Boys pop up here and there but seconds later I am thinking The Hives, and right after that I am simply taken back to the fact that toyGuitar have managed to pick up musical flavours and fragrances from all over and blended them into this “mess”. It did take me a couple of listens to really get into what is going on here but right now I am hooked on toyGuitar. If there is one criticism, the sound is at times so high-end that it was pretty hard to listen to on my admittedly not top-of-the-range car stereo where the guitars became one with the beat of a straining car engine, creating a not very soothing sound. Minor critique aside they have taken familiar sounds and elements and created a great blend of punk, garage and pop music that totally works for me on the stereo at home rather than the car! Tom Chapman

ToyGuitar – In This Mess (Fat Wreck)
Holy hot damn, what a bolt of the blue! These sixties garage rockin’ folks, fronted by a member of the Swingin’ Utters, and their hopelessly infectious tunes are just the ticket when you’ve got the blues and need something to rapidly turn your frown upside down. Imagine going on a lifelong alcohol and narcotics bender with The Sonics, The Stranglers, The Hives and The Dwarves and reaching a mind bending high and state of cranium fizzed delirium that lasts forever, and that boys and girls, is what listening to ‘In This Mess’ is like. It makes you want to do the Monkey and dance your heart out every single time you play it, or at least that’s what it does for me. I can’t really speak for you, as I don’t know you. Or do I? Anyways, if toyGuitar can make a jaded, cynical, miserable old bugger like me smile and break out my best moves, imagine what it’ll do for you. Exactly! Kind of cool, huh? Can you dig it? Yes, I most certainly can…. Tim Mass Movement