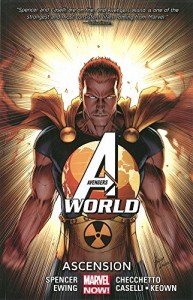 Avengers World: Ascension – Nick Spencer, Al Ewing, Marco Checchetto & Stefano Caselli (Marvel / Panini)
It used to be so much easier to be an Avengers fan. One book and one team to follow and that was it. These days though, with multiple Avengers titles tying, and feeding, into each other, it’s become an increasingly difficult proposition, as the amount of continuity and sheer volume of character arcs and development, not to mention ongoing plot threads is staggering and at times, it feels like you have to be a have a genius level IQ just to keep up with everything that’s happening in the Avengers Universe. Which makes a refreshing change, as the many writers and artists know that their audience is switched on and possessed of enough intelligence to be able to follow and enjoy every intricate detail, and while it may be true that the increasing number of titles on any discerning Avengers fan’s pull list may very well finically cripple them, it’s also true that being broke has never been this enjoyable. And the journey to fiduciary ruin continues, at a frankly ridiculous and breath taking pace, in the latest instalment of Avengers World, ‘Ascension’.

With AIM having established its own nation state thanks to an incredible technological leap forward, the city of Madripoor now being carried through the skies on the back of an ancient dragon commanded by Gorgon; and in the wake of the mysterious disappearance of the population of Velletri, other cities and their populations beginning to fall victim to the same magic. Knowing the scale of what’s at stake, The Avenger’s hurl themselves into the fray, and in so doing begin to understand the limitations of AIM, finding themselves a little closer to solving the mystery of their sudden, and previously inexplicable, rapid rise to power, and begin a covert mission to put paid to their machinations, while at the same time discovering the identity of the force behind the devastating world-wide sorcery. While The Avengers meet their foes head on, a new player in the intelligence community and a new team of hero’s reveal themselves and rise to face the crisis, causing a sudden shift in the balance of global influence and teasing a variety of future possibilities for both SHIELD and The Avengers.

Spencer, Ewing and Checchetto have put the capital ‘E’ back into excitement with ‘Ascension’, a visually stunning, multi-tentacled story full of twists, turns and unexpected reveals, and the slowly evolving, and gradually appearing back-story and history of Marvel and The Avengers answer to Superman (following in the footsteps of the Sentry), Hyperion, is worth the price of admission alone. Absolutely essential and thoroughly recommended… Tim Mass Movement