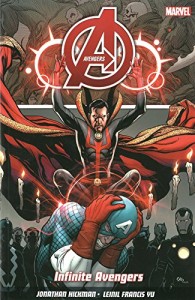 Avengers: Infinite Avengers – Jonathan Hickman & Leinil Francis Yu (Marvel / Panini)
How did that old saying about buses go? I believe it’s something along the lines of “you wait ages for one and then three come along at once” isn’t it? Which is incredibly similar to ‘Avengers’ books, because after waiting for what seemed like an eternity of nervous nail chewing, two (this, the latest instalment in Jonathan Hickman’s ongoing epic and ‘Avengers World: Ascension’) arrived at the same time, which meant that I could leave the bloody stumps of my masticated fingers alone, for a while at least, and dive straight into the much longed for action and adventure of the continuing Avengers saga.

‘Infinite Avengers’ is the story of how Captain America finally learned the truth about The Illuminati (the Marvel variety not the mythical group that have stocked, and continue to feed, the fires of a thousand crazy conspiracy theories) and their plans to prevent the destruction of Earth in the planet smashing, universe colliding reality of the Multiverse. It’s story of betrayal, discovery, revelation and confrontation, as after gathering the Avengers and challenging Tony Stark with what he knows, Captain America (as a direct result of the actions that led to him uncovering the schemes of his “former” friends) and his hastily assembled team are propelled forward in time, to face an uncertain future. Pausing for brief intervals at different periods, Cap slowly begins to fit all the pieces of the Illuminati jigsaw and the ramifications of their agenda and the cold, hard certainty of the multiverse crisis, a certainty that charts his course and seals not only his own, fate, but those of his colleagues and the latest, and almost certainly, deadliest foes that they’ve ever faced. The Illuminati.

Jonathan Hickman is a master world builder, a supreme creator of legends and epics and a storyteller par excellence, crafting a mind-bending, cranium bursting tale built on secrets and discoveries that intertwines a jaw dropping, audacious plot with incredible feats of super-heroism. As much character, as event and circumstance, driven, ‘Infinite Avengers’ staggering, ingenious scenario is matched, panel for panel, by the eye-popping, beautiful artwork of Leinil Francis Yu, and the combination of both has produced something astounding. It’s simply incredible. Just… Incredible… Tim Mass Movement