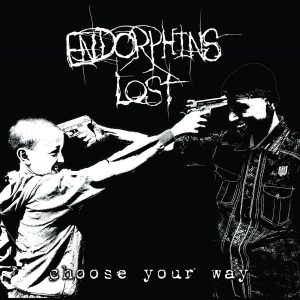 Buckle up buttercup and get ready for your world to come crashing down around you in a glorious tsunami of whirling Hardcore mayhem and destruction. Endorphins Lost strike hard and strike fast, subsuming all in their path with their blast beat powered fusion of Extreme Noise Terror, Capitalist Casualties, Deviated Instinct, Swedish D-Beat, Power Violence and raging late eighties style Crossover. Magnificent in its unforgiving, and unrepentant brutality, Choose Your Way, is like the HC scene’s version of Robert E. Howard’s Conan, as it crushes its enemies, sees them driven before it and revels in the lamentations of the lesser bands and records that tremble in its wake. Rejoice, for Endorphins Lost have arrived… Tim Cundle