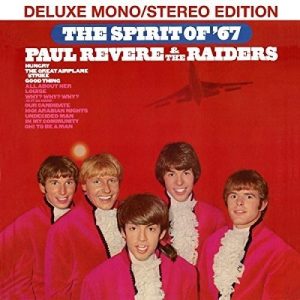 When I was growing up, my folks were (and my Ma still is) massive Mersey Beat fans and day after day all I ever heard was either the bloody Beatles or Gerry and the Pacemakers and that endless diet of the same records, played over and over again, put me right off the sixties and it’s musical output. At least it did until I heard Paul Revere & the Raiders, as stashed at the back of my old man’s records was an album called The Spirit of ’67, which he put on one day, and as soon as I heard it, I fell for it big time. The band weren’t doing anything particularly revolutionary or out there, but their proto power pop meets rock’n’roll flavoured with hint of what would later become known as psychedelia, instantly struck a chord with me. Like a cross between the Monkees and the Rolling Stones, fusing the formers insanely catchy melodies with the latter’s high energy blues, Paul Revere & the Raiders played with the same wild abandon and Devil may care attitude as The Who and every single one of the songs on this record is a testament to that. In my mind, The Spirit of ’67 has always been, and always will be, one of Paul Revere & the Raiders finest moments and nothing will ever dissuade me from thinking otherwise.  Get down with the true sounds of the Sixties…  Tim Cundle