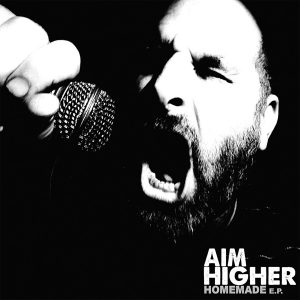 There are few folks in the HC scene, and even less in the world, that I hold in the same high regard as Kevin Seconds. The man was, is and always be, an inspiration to generations of Hardcore kids, old and young, and his latest band / side-project / one man HC wrecking crew outfit, Aim Higher illustrates why he’s still at the top of the punk rock food chain. Homemade is comprised of four infectiously catchy, driving, melodic Hardcore sing-a-long anthems that bear more than a passing resemblance to early 7 Seconds (which is hardly surprising) and have been stuck in my head for the last two days. Every time I go to make a cup of coffee, I end up humming For A Reason and there was a particularly embarrassing incident at a supermarket checkout that may or may not have involved some finger pointing, me singing Mouth of a Stranger and asking the lady serving me and the folks behind me in the que to sing-a-long because, y’know, they must know the words. Anyway, I digress and quite frankly that’s enough of my hardcore shopping misadventures for one day. Aim Higher. It’s Kevin Seconds and it rules. Hail to the King baby… Tim Cundle

Damn, this sat in my inbox for a while before I even thought to give it a listen. Having just had the briefest of glances at the cover, the band name meant nothing to me and I had a pile of new records that Santa brought me so this was bottom of the pile. More fool me! If I had looked a bit closer at the record sleeve, there may have been a flicker of recognition, but within seconds (…) of the first track kicking into life, all suspicions were confirmed –  Aim Higher is a new project from none other than Kevin Seconds! This record features four tracks and as the title suggests, this is a lofi recording with no frills or fancy effects.  In fact, take the sound of a release like the 30+ year old Blasts From The Past EP, add some of the sweet little touches from New Wind or Soulforce Revolution, and blend in the urgency and delivery of modern day 7 Seconds and you’re getting close to the sound that Kevin has very successfully captured on this record. I know he had a recent project of recording something like a new song every day for a year, and he certainly managed to bang a couple of hundred out! Bearing that in mind it’s obvious Mr Seconds has plenty of tricks up his sleeves so with a bit of luck this is just the start of another great musical journey. Tom Chapman

A four song EP by a new band. It’s pretty hard to get attention with that kind of release, these days. However, when I mention that non-other than the mighty Kevin Seconds is fronting this lot, heads  will most definitely turn. And rightfully so. It sounds and feels like 7 Seconds, be it a bit less edgy. All songs are short, to the point and are proof that Kevin still is aiming to stay young until he dies. Martijn Welzen