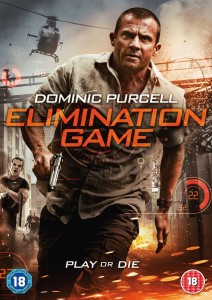 Elimination Game (Altitude)
Bravely attempting to conjure the spirit of Eighties greats like ‘The Running Man’, ‘Elimination Game’ doesn’t seem to quite know where to pitch itself. It toys with satirical social commentary, but doesn’t quite go far enough… it feels perched on the edge of ultra-violence, but chooses not to dive in… it starts to set itself up as a dystopian sci-fi, with war criminals interred on a ‘Neo-Alcatraz’ and the world in the throes of ‘World War Africa’, but never fully explores any of these premises (budget limitations, I suspect)… and it could be darkly humourous if its cast wasn’t so deadly serious about proceedings.

Which basically comprise a big-jawed Dominic Purcell, playing a disgraced Navy SEAL and out-acted by his own pecs, lumbering from one violent showdown to the next, dodging hails of bullets and not looking overly convincing in the hand-to-hand combat stakes, as he works his way through the levels of a blood-thirsty game show. Called ‘Turkey Shoot’, a knowing nod to the 1982 Australian flick of the same name, it features two super cheesy presenters, introducing various villains with names like Ram Rod, Killshot and Armageddon for our Dom to dispense with extreme prejudice, as he finds himself coming to in increasingly bewildering locations. With a tagline for Turkey Shoot’s opening credits of ‘It’s live – with death!’, and with Dom mumbling lines like, ‘They tried… they died!’, whilst despatching his enemies with hammers, arrows, garrotting wire and even bazookas, it’s dumb macho fun, and a vaguely entertaining way to veg out for 85 minutes.

Unfortunately the over-reliance on CCTV footage fails to engage the viewer as the film tries to build to a finale, and Dom sums it up best when he has the following riveting conversation with co-star Viva Bianca: “It’s not about revenge anymore…” “So what is it about?” “I don’t know!”

Viewers will share his confusion as he relentlessly batters his way back to Washington to clear his name – if only we knew, if only we cared… Ian Glasper