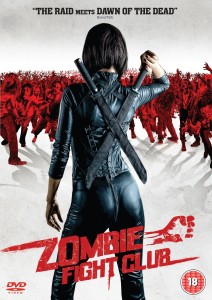 Zombie Fight Club (Altitude)
An unashamed exploitation flick of the highest order, ‘Zombie Fight Club’ is a deranged mash-up of full-blown horror and splattery action, paying as much homage to ‘Dredd’ as ‘Evil Dead’. For some unknown reason a zombie holocaust has descended upon the earth, and the first two-thirds of the film centre on an apartment block in Taipei overrun by the undead hordes. So far, so clichéd, you might think, but in less than ten minutes you have zombie blow-jobs and zombies crashing a Halloween party. Throw in a SWAT team, headed up by a hedonistic corrupt cop, who raid a drug cartel in the same block, and the scene is basically set for some super gory mayhem, as the good-looking cast take on the zombies with chainsaws, LPG cylinders, meat-grinders, and, er, salt and boiling water. There’s plenty of decent martial arts choreography, and some imaginative physical effects – like the zombie with a mouth in his chest cavity, full of yawning teeth – so it’s a shame the film also relies heavily on shoddy CGI blood sprays, because when Chien hits his stride, he generates some real excitement. One memorable scene has a hall full of shambling corpses chasing a granddad, who fights off his assailants with his Zimmer frame!

Unfortunately the film takes a jarring turn for its final half hour, jumping forwards a year to a futuristic underground hideaway where human survivors are pitted against zombies in a gladiatorial arena for the amusement of an evil overlord and his scantily clad sex slaves. Yes, you read that right. What the fuck. It’s all very comic book, and more than just a little ‘The Walking Dead’ via ‘Ong Bak’, but Chien just about gets away with it by keeping the pedal to the metal to the very end, and to hell with the consequences. That irreverent gung ho attitude serves him well all the way through ‘Zombie Fight Club’. Ian Glasper