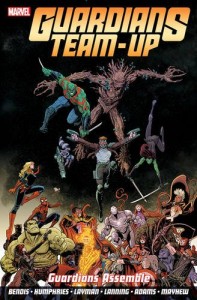 Guardians Team-Up: Guardians Assemble – Brian Michael Bendis, Sam Humphries, Andy Lanning, John Layman, Art Adams, Stephanie Roux, Mike Mayhew, Otto Schmidt, Gustavo Duarte, Chris Eliopoulos, Scott Gray, Colleen Coover, Buddy Scalera, Ig Guara & Gurihiru Studios (Marvel / Panini)
Four years ago, if you’d told me that the highest grossing Marvel film of all time would feature a walking tree, a talking raccoon, a semi-psychotic revenge obsessed alien, the strangely attractive daughter of Thanos and a space –pirate, I’d probably have asked your Doctor to either up the dosage, or change your medication. It was, in my mind anyway, if I may quote the intellectual colossus Vizzini, inconceivable. Yet here we are. It happened and the Guardians of the Galaxy are a world-wide phenomenon. And while a lot of long-time comic guys might grumble and moan about having to share their beloved characters with the mainstream, I think it’s kind of groovy. Actually, I think it’s incredibly groovy because more people seeing the film means more people will buy the book, which means that more people get into comics and that is just fine and dandy with me. Even if they only read ‘Guardians of the Galaxy’, it pens their mind to a different world. They won’t, they’ll read more because we all know the tantalising allure of the superhero crack known as comics and their one look and you’re hooked power. The geeks (that’s you and me by the way) really have inherited the Earth and it’s all thanks to alien botany and a cybernetically enhanced mammal. Funny how things out isn’t it?

Anyways, back to our interplanetary version of the A-Team and their latest tales of daring do, ‘Guardians Team-Up’. As the title suggests, it’s a collection of the various ‘team-ups’ that the Guardians have been involved with, from Gomora joining forces with She-Hulk to escape from and defeat an army of cloned intergalactic bounty hunters, to Ronan The Accusers run in with the Black Vortex and Star Lord, to the team fighting off the Chitauri alongside the Avengers when a disgruntled sibling and her employer team up in order to get even with a member of the Guardians. Then there’s my favourite, the-don’t-laugh-too-hard-or-you’ll-pee-your-pants funny tale of what happens when Rocket accidentally joins forces with the Pet Avengers to defeat the Pets of Evil Masters. And to top it all off, there’s the added bonus of the first issue of ‘Tails of the Pet Avengers’, a book I’d previously written off as being, well a little you know, aimed at a certain market that didn’t include grumpy middle-aged men like yours truly. However, I’m not afraid to admit when I’m wrong, and I was wrong about ‘Tails…’, as it’s snappy, bright collection of stories that’ll brighten even your darkest day and put a smile on your face that even decaffeinated coffee won’t be able to shift.

The artwork is wonderful and the plots will suck you in and refuse to let you go, and I will guarantee, absolutely guarantee, that try as you might, you won’t be able to put this book down until you’ve read it from cover to cover. Twice. Because, you know, you might have missed something the first time. It’s fun with a capital F and sometimes that’s all you need or want from literature, a little escapism from the grim reality of the big bad world, and brothers and sisters, ‘Guardians Assemble’ does exactly that. It transports your imagination, lifts your spirits and makes you forget all about the awful stuff happening outside your door. Which is nice… Tim Mass Movement