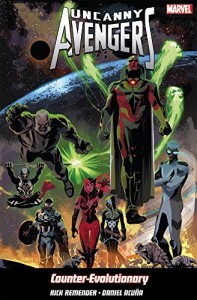 Uncanny Avengers: Counter-Evolutionary – Rick Remender, Daniel Acuna & Gerry Duggan (Marvel / Panini)
‘Axis’ nearly ripped the Avengers world apart. It took them and every other hero in the Marvel Universe, to brink of destruction and even though they emerged victorious, the price they paid for their victory was almost too much for them to bear. Almost. Avengers’ founding member Iron-Man, Uncanny Avengers linchpin and -bridge between the x-Men and the Avengers- Havoc remain inverted, having also kidnapped Havoc’s wife – the Wasp; and brother and sister duo Quicksilver and The Scarlet Witch have discovered that Magneto isn’t really their father, things are a little tumultuous in the Avengers camp. So, when The Avengers’ most famous mutants’ attempt to find out who they really are, where they came from and who their parents really were takes them to Counter Earth, it’s left up to the Uncanny Avengers, led by the Vision, to go after them and bring them home.

Things are never easy, or straightforward, for any Avengers team though, and their rescue and recovery mission soon goes awry and one by one, they find themselves falling into the clutches, and at the feet, of the High Evolutionary. Counter Earth is his world to do with as he likes, a laboratory in which he creates and destroys civilisation after civilisation after they fail to live up to his ideals and his notions of potential. However, genocide never goes unpunished for long, and with the souls of the dead screaming for vengeance and the survivors of the High Evolutionary’s experiments banding together to strike back, they find the heroes to lead them against their oppressor. They find the battered and bruised Uncanny Avengers and as the war for the future of Counter Earth rages, the secrets and the truth that Quicksilver and the Scarlet Witch went in search of, are slowly and painfully revealed.

‘Counter-Evolutionary’ is a ridiculously quickly paced book, cramming a multitude of events and sub-plots into its five issue arc. As well as the revolution led by the Uncanny Avengers and the discovery of Quicksilver and the Scarlet Witch’s origins, it also explores the impact that suddenly being gifted everything he has ever desired has on the Vision, testing his humanity as he’s forced to choose between loyalty and love, and duty and all that he craves. It also charts the journey that Sabretooth has begun since his inversion and how he finally begins to understand and empathise with Logan and the direction his life took him in. And then there’s Rogue and the new Captain America and…. Ah, but I’ve said too much, I don’t want to spoil it for you do I? Duggan and Acuna’s artwork is enticing and beautiful, pulling you into the action as it explodes from every panel and page, and Remender’s story is an exhilarating feast of drama and characterisation that serves as reminder of why we, that is you and me, continue to read the adventures of The Avengers in all their facets and forms. Because when they’re this good, there isn’t another book out there that can even come close to capturing the four colour glory held in these pages. You know what comes next and I’m sure you know the words, so why don’t you say them with me? Uncanny Avengers… Assemble! Tim Mass Movement