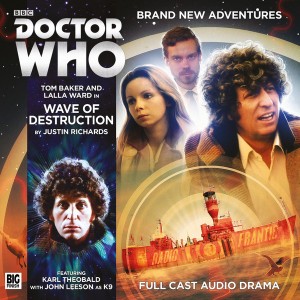 While relaxing in their house on Baker Street, and attempting to throw the Black Guardian off their trail in sixties London, the Doctor and Romana are spurred into action when a modulated frequency wave cancelation signal (no, I don’t know what it is either, but it sounds great doesn’t it?) causes K-9 to shut down. Bored by their situation and intrigued by the discovery of technology that shouldn’t exist in the time period, they decide to investigate the origin of the broadcast.  Their investigation leads them to the wave’s inventor, who they find unconscious with a secret agent hovering over him. Before the Doctor can even offer anyone a jelly baby, he and his equally intrigued partner, find themselves caught up in the murky worlds of espionage (which involves a surprising amount of paper work) and pirate radio while fighting to prevent an attempted invasion of Earth by an old, and particularly vicious and nasty, foe.

Justin Richards has managed to capture, and recreate, all of the little nuances and subtleties that helped to define the wonderfully eccentric chemistry that was ever present in the Doctor and Romana II’s relationship in Wave of Destruction. Highly reminiscent of the Douglas Adams era of the show, Wave of Destruction is a humorous, and often laugh out loud funny, uplifting “tribute” to the sixties that’s crammed full of knowing, ingenious Whovian jokes and references to the “classic” series.  Tom Baker and Lalla Ward are, as you’d expect, superb, falling into character with consummate ease and ensuring that the Timelords affinity for each other takes centre stage while events play out around them. It’s a groovy tale that’s got the lot, adventure, excitement, monstrous moustache twirling villains, a fast, ferociously paced, involving plot and enough laughs to make even the most serious and fervent  Who fan chuckle. Get down and get with it… Tim Mass Movement