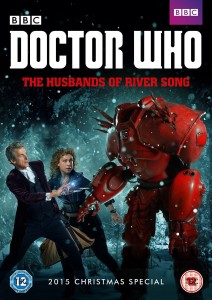 Just when you thought you’d seen the last of her, she returns to make the Doctor’s life even more complicated as she plunges them both into another life or danger adventure. That’s right, River Song, the Doctor’s wife, is back and this time she’s after one of the richest prizes in the Universe, the Halassi Androvar, a fabulous, priceless diamond. The only problem is, it’s lodged in the brain of the fearsome intergalactic warlord and conqueror, King Hydroflax, who just happens to also be the husband of one River Song.  Having requested a surgeon to “save” her husband and retrieve the diamond, in a classic case of mistaken identity, the Doctor – who as usual is in the wrong place at the right time – is summoned to perform the surgery. River however, has never met the Twelfth Doctor, despite his dropping hints and fails to recognise him before he gets caught up in the fallout from her venture. And when her scheme inevitably goes wrong, the “happy” couple end up being pursued halfway across the galaxy by a homicidal cyborg with a penchant for collecting heads, falling foul of a strange cult dedicated to the aforementioned Hydroflax and end up becoming responsible for the creation of the place where they’ll spend their last night together, the restaurant at the Singing Towers of Darillium.

The Husbands of River Song is a funny, touching and endearing comedy of errors and identity which is as much about the relationship that exists between its central characters as the story. Immersed in chaos and misfortune, they continue to surprise each other, with the Doctor discovering more of his significant other’s secrets and River finding out that no matter how well she though she knew him, the Doctor still has a few tricks up his sleeve that can shock and astonish even her.  The onscreen chemistry and rapport between Alex Kingston and Peter Capaldi is extraordinary, bleeding into both their performances and the plot. While the Doctor Who Christmas Specials have become a tradition, they haven’t always been the strongest of stories, but The Husbands of River Song might just, along with The Christmas Invasion, be the exception to the rule, as it’s a slightly mad, but thoroughly enjoyable tale. It’s true you know, you really can’t keep a good woman down… Tim Mass Movement