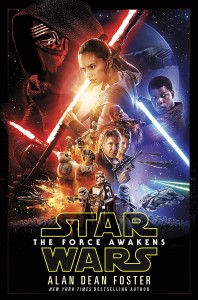 A long time ago in a place far, far away, I spent countless afternoons pouring over and consuming the original novelisation of ‘Star Wars’. Having been taken to the cinema to see the film and after I nearly lost my five year mind in a raging maelstrom of joy, excitement and sheer disbelief, I drove my parents crazy in a relentless campaign of nagging, pleading and petulance in my bloody minded, war of attrition that I waged in order to get my hands on the ‘Star Wars’ book. Realising that victory was impossible to achieve in the face of such overwhelming force, they finally acquiesced and bought it just to shut me up. It was my first taste of Science Fiction, and even though my initial interest in it had only be peaked by the thought that I could relive the film over and over again (hey, this was pre-video and back when folks thought that if you didn’t see it in the cinema, you’d have to wait anything up to ten years to see it on TV and then it could be anything up to five years before it was repeated. It was an uncivilised time in a far less civilised age), it changed everything for me. It  paved the way for my lifelong devotion to the literary and cinematic genre that’s, to this day, closest to my heart. That book was written by Alan Dean Foster. I know it’s credited to George Lucas, but don’t believe everything that’s presented as fact, because the original ‘Star Wars’ novelisation was ghost authored by Alan. How else do you think he got the gig for ‘A Splinter in the Mind’s Eye’, the “forgotten” and all too often ignored sequel that continued the adventures of Luke Skywalker? I’m not saying that the beard owed him a favour after Alan let him take the aformentioned credit for the novelisation, but George Lucas, by all accounts, always honours and pays his debts. This is also why, despite the fact that the franchise is now owned by Disney, I always knew that Alan Dean Foster was the only writer for the job when it came to the novelisation of ‘The Force Awakens’. He was there in the beginning, so it was only right that he should be there when it started again. And it’s got absolutely nothing to do with the fact that I’m a major league fan-boy of his writing and books. Nope, that’s got nothing to do with it all. Honest.

Let’s cut straight to the chase shall we? If you’re even slightly interested in this book, it means that you’ve already seen the film and you’re familiar with the plot. You know who Rey, Finn, Poe, BB-8 and Ren are. You know about the First Order, the destruction of the Republic and the Resistance striking back at the heart of the dark force that once again threatens to subjugate the galaxy by destroying the First Order’s ultimate weapon, Starkiller Base. And you almost certainly know about the race to discover the whereabouts of the long missing Luke Skywalker in order to redress the imbalance in the Force and you definitely know that the introduction of a new set of players, meant that we had to bid farewell to a much loved, long established character whose death broke the hearts of a million forty something fans the world over. You know all of this, you know the story, and it’s captured completely and utterly, in the dramatic and exciting prose of Alan Dean Foster.  It’s snappy, punchy, exhilarating pace reflects that of the film perfectly, and while you’re eagerly digesting each and every page, JJ Abrams movie replays itself, frame by frame in your imagination. There are, of course, a few, minor additions to the story, due in no small part, I’m assuming, to deadlines meaning that the author worked from scripts and a pre-release cut of the film, but more Star Wars is never a bad thing and only amplifies the overall enjoyment of the novel. It really is a movie in your mind. Alan Dean Foster has done it again. He’s captured cinematic lightning in literary form.  I knew he would… Tim Mass Movement