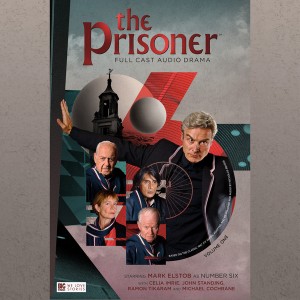 Of all the series that have, over the years, captured my imagination, there’s only ever been opening sequence that sent, and continues to send, shivers down my spine every single time I hear it. That series is The Prisoner. That music, that wonderful music  which gradually faded into Patrick McGoohan arguing with the face of his captors, Number Two, about where he is, who he is and what they want from him is almost as iconic as the show itself. It immediately found, and continues to find, favour with anyone who has ever felt crushed underfoot, swept aside or belittled by society and the system of governance in, under and by which we live. Having first fallen under its spell  when it was repeated on ITV in the early hours of the morning many moons ago, then buying it on video and then purchasing it on DVD to replace the, by then, worn out VHS cassettes, I’ve lost count of the number of times that I’ve watched and returned to the series. And every single time I do, I discover something new, something hidden in plain sight it that I hadn’t noticed before, which makes me fall in love with the series all over again. Given the way I feel about The Prisoner, I was a little cautious and apprehensive about this adaptation, but less than two minutes into the action, all of my worries and fears had disappeared; I was transfixed and, once again found myself captivated and mesmerised by The Prisoner.

For those unfamiliar with it, The Prisoner is the story of a secret agent, who upon his resignation is kidnapped by a shadow government department and transported to a strange, secret location known only as ‘The Village’. Given the designation ‘Number Six’, he is regularly interrogated, tortured and questioned about the reason for his resignation by the furtive ‘Number Two’ a role assumed by a number of different individuals, none of whom manage to break, or get a satisfactory answer from Number Six. Despite multiple attempts to escape from ‘The Village’, the hero of the hour always finds himself back where he started, ready to plan his next attempt to flee his persecutors.  Building on the foundation laid down by the original series, Volume One expands and enhances three episodes (Arrival, retitled Departure and Arrival, The Schizoid Man and The Chimes of Big Ben) from the show, and in doing so adds extra depth to Number Six and his personal history, the stories and the overall arc and plot. While each is reimagined in grand fashion, given a technological make-over, intensified and amplified by both the writing and performances of the exemplary cast, the real revelation is Your Beautiful Village. Haunting, more than a little frightening and wickedly ingenious, it’s a masterclass in psychological warfare, in which Number Six comes close to cracking thanks to his burgeoning friendship with Number Nine being exploited by Number Two who comes close to devastating his opponents psyche through his harrowing usage of sensory deprivation.  If I didn’t know better, I’d have sworn it was part of the show’s already established canon, as it seamlessly incorporates the ideas and themes of The Prisoner into its gripping and thought-provoking design.

Darker in tone, feel and execution than its progenitor, The Prisoner is an exciting, engaging thriller that’s been upgraded for a twenty first century audience without losing any of the ferocious tension, intelligence and energy that originally made it so special. Nicholas Briggs has achieved the nearly impossible. He’s reimagined and breathed fresh, vibrant, creative life into The Prisoner. His passion for the series in writ large in every word, phrase, character and wonderful plot twist of this exceptional drama, while Mark Elstob’s portrayal of Number Six is uncannily good and if Patrick McGoohan was still with us, he’d pin his character’s badge to his successors lapel, while telling him, “He’s all yours”.  I think I’m going to be spending a lot more time in ‘The Village’ from now on. Be seeing you… Tim Mass Movement