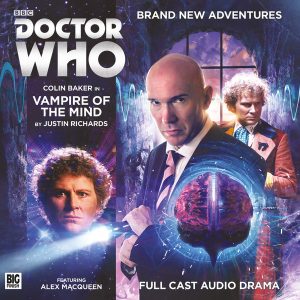 And so we move into the middle act of the Master trilogy; with the Sixth Doctor at the helm of the Tardis which is, rather aptly, unused in this story.  Popping in to visit an old friend, Professor Threadstone, the Doctor finds out that his acquaintance has set off to try and find a scientific colleague of his who has gone missing while supposedly on holiday in California. It soon becomes apparent to the Doctor (with a little help from the Professor’s daughter, Heather) that her father’s associate isn’t the only scientist who has disappeared. As there’s nothing the Doctor likes more than a mystery, and with a new “companion” in tow, he resolves to discover the whereabouts of, and what has happened to, the missing scientists. His investigation leads him to the Dominus Institute and straight into the black, unforgiving heart of The Master’s latest terrible experiment. With an army of mindless zombies at his command, The Master has set a trap for the Doctor, one that lures back to a familiar battleground, where once again, he’s destined to lock horns with his oldest foe. It’s a fight that The Doctor must win, for if he loses, he’ll lose everything that he is and The Master will be free to roam to cosmos with no-one to stop him.

From the off, Vampire of the Mind feels like a Third Doctor tale, having the same tone and pace as his early adventures and a plot that would have been right at home in the middle of the classic Pertwee / Delgado stories. Designed to fit that mould, the precision engineering of Justin Richard’s script, from the location of the tale through to the Tardis not being featured and even the inclusion of one of the most beloved of Third Doctor quotations, ensures that Vampire of the Mind fulfils its objective perfectly.  Astonishingly well written and executed, it’s a testament to both author and cast that this extraordinary seventies style story of mad scientific genius being perverted for the selfish ambitions of the Whoniverse’s resident moustache twirling villain (played with wonderful aplomb by Alex Macqueen), works so well as a contemporary Sixth Doctor adventure.  It doesn’t dawdle for even a second and uses every moment to build tension, further the story, and develop its detailed and remarkably well defined characters. All of which allows the Master to weave his particularly vicious web in preparation for his inevitable showdown with The Doctor. Classic Doctor Who at its classic best… Tim Cundle