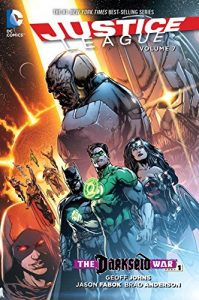 While they used to be a cause for rabid, fevered celebration, it could be argued that four colour crossover events and paradigm changing storylines have almost become the norm; something that fandom has come to expect instead of being surprised and shocked by.  It’s an argument that under normal circumstances I’d credit with having at least a degree of validity as expectation reduces the intended impact of any world shattering, universe ending plots; and most readers now know that despite what he or she is being told and shown, that everything will work out, for better or worse, in the end.  As I said, under normal circumstances, I’d quantify it is having at least a little weight and bearing, but these aren’t normal circumstances as I’ve just had my mind blown and every single of my expectations demolished  by Geoff Johns opening salvo of The Darkseid War. It’s everything that major comic book events used to be, should be and could be again and over the course of the book reinforced my faith in Johns as one of the premier writers of his, or any other, generation.

It’s the story of the Anti-Monitor seeking to regain everything that he lost as he became the being that he is, the destroyer of Universes and the guardian of the Anti-Life Equation.  In seeking “redemption” he’s guided toward the belief that what he seeks can only be found by defeating Darkseid, and so the drums of war begin to sound and “Gods”, for that is essentially what the protagonists are, begin their journey down the path to war. It’s a war however, that is set to be fought on Earth, one that is guided by the hand of another, and one in which the Justice League become subsumed. The Darkseid War Part 1 charts the run-up to the initial battle and how the scheming and fallout from both the intricately woven plans and the conflict itself affect all of the League’s members. It’s a story of discovery, of forbidden knowledge, of the machinations of creatures who would be gods and the mortals who stand in their way, of the irrepressible nature of personality and its urges and drives, of rediscovered purpose, comradeship and rivalries. And a war that, even in its outset throws the mythology of the DC universe into chaos in an unexpected and astonishing cliff-hanger ending that leave you desperately trying to prise your jaw off the floor. It’s a lightning quick, ingenious story full of startling reveals and John’s incredible and engaging gift for prose, that’s as reliant on characterisation as it is action, and one that thanks to Jason Fabok’s exquisite, fabulously detailed and beautiful artwork, burns its way into the readers imagination.  Welcome to the end of the world…  Tim Cundle